While the first successful Bald Eagle nest of the post-DDT era in Boulder County was in 2003, nesting attempts began in fits and starts almost a decade earlier. The Hygiene territory was the site of one of these early attempts: from 1994 to 1997, a pair of Bald Eagles constructed and augmented a nest about 1 mile north of the current Hygiene nest, but this period yielded no young eaglets. Finally, in 2005, a pair of Bald Eagles nested successfully in a former Red-tailed Hawk nest not far from the earlier nesting activity.

Records from Boulder County Parks and Open Space indicate that a different pair of Bald Eagles—both with numbered bands on their legs—commandeered the Hygiene territory in 2010 and established a new nest in the current nest tree (photo #1). The numbered bands tell us that both adult eagles originated from separate nests, each about 25 miles away from the Hygiene nest site. This adult pair (photo #2 and photo #3) successfully fledged three juvenile eagles in 2011, more than fifteen years after nesting activity began in the area. 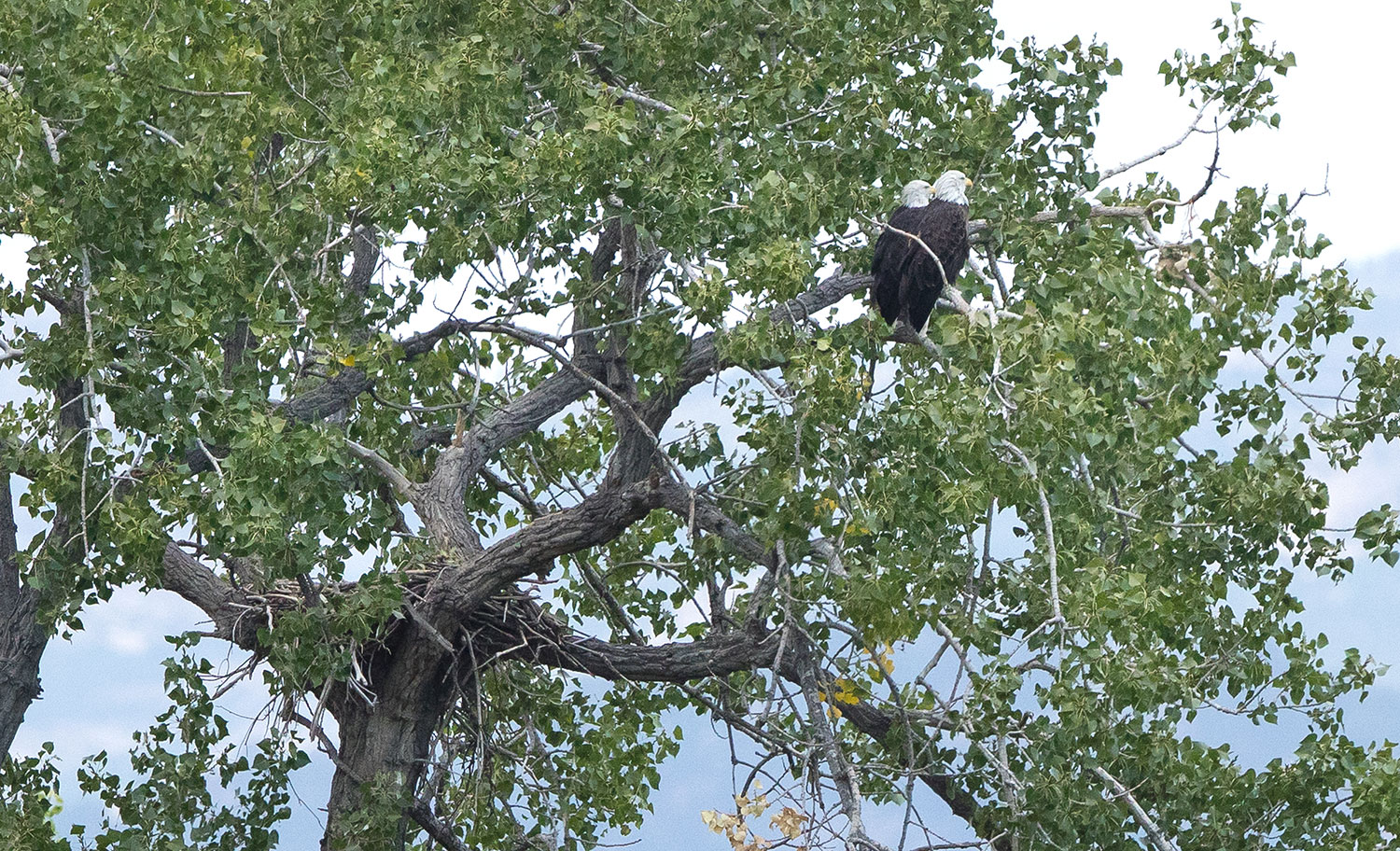 Photo 1: Hygiene pair at their favorite perch just above their nest in September 2019. Female on the right. 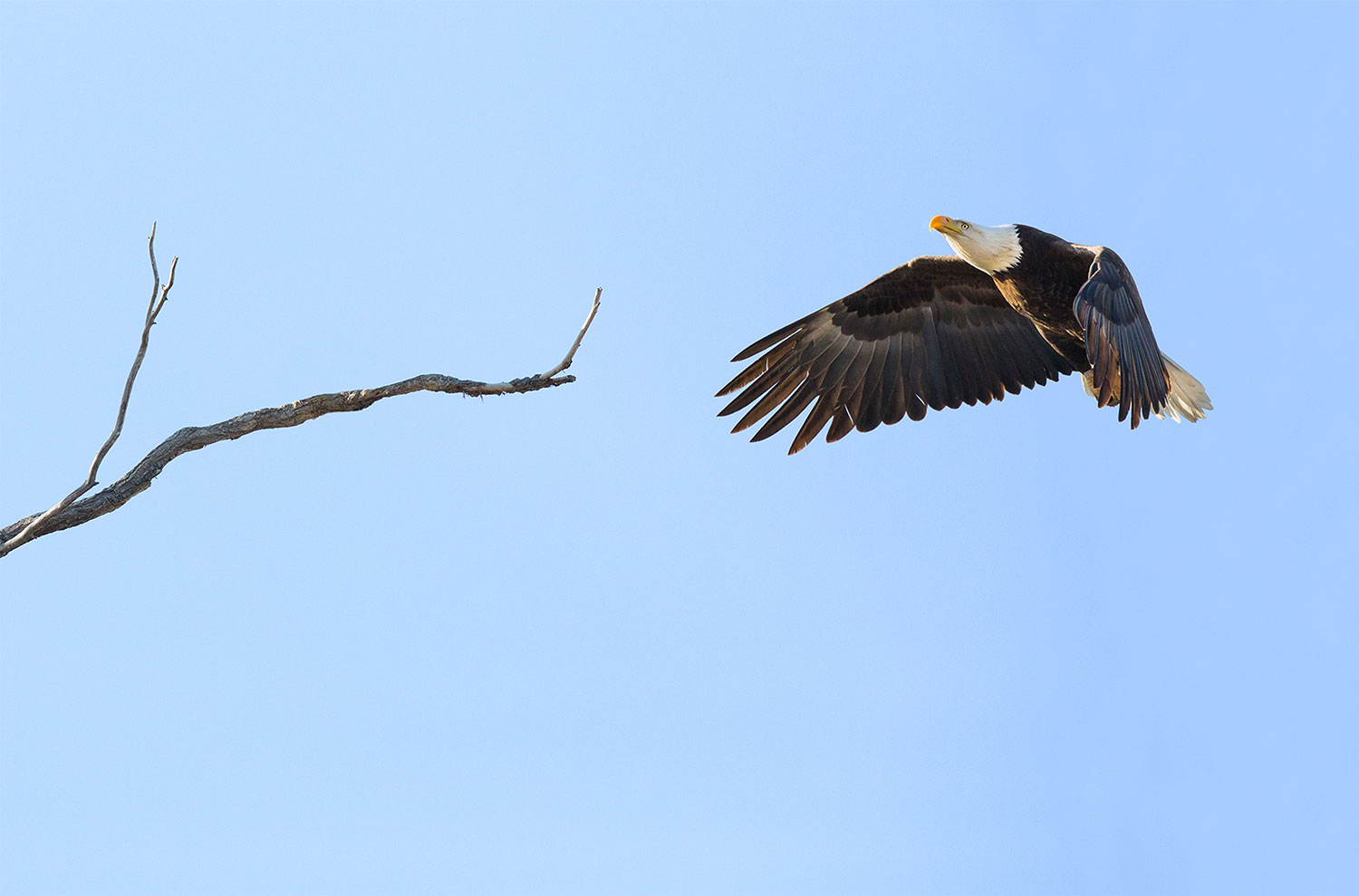 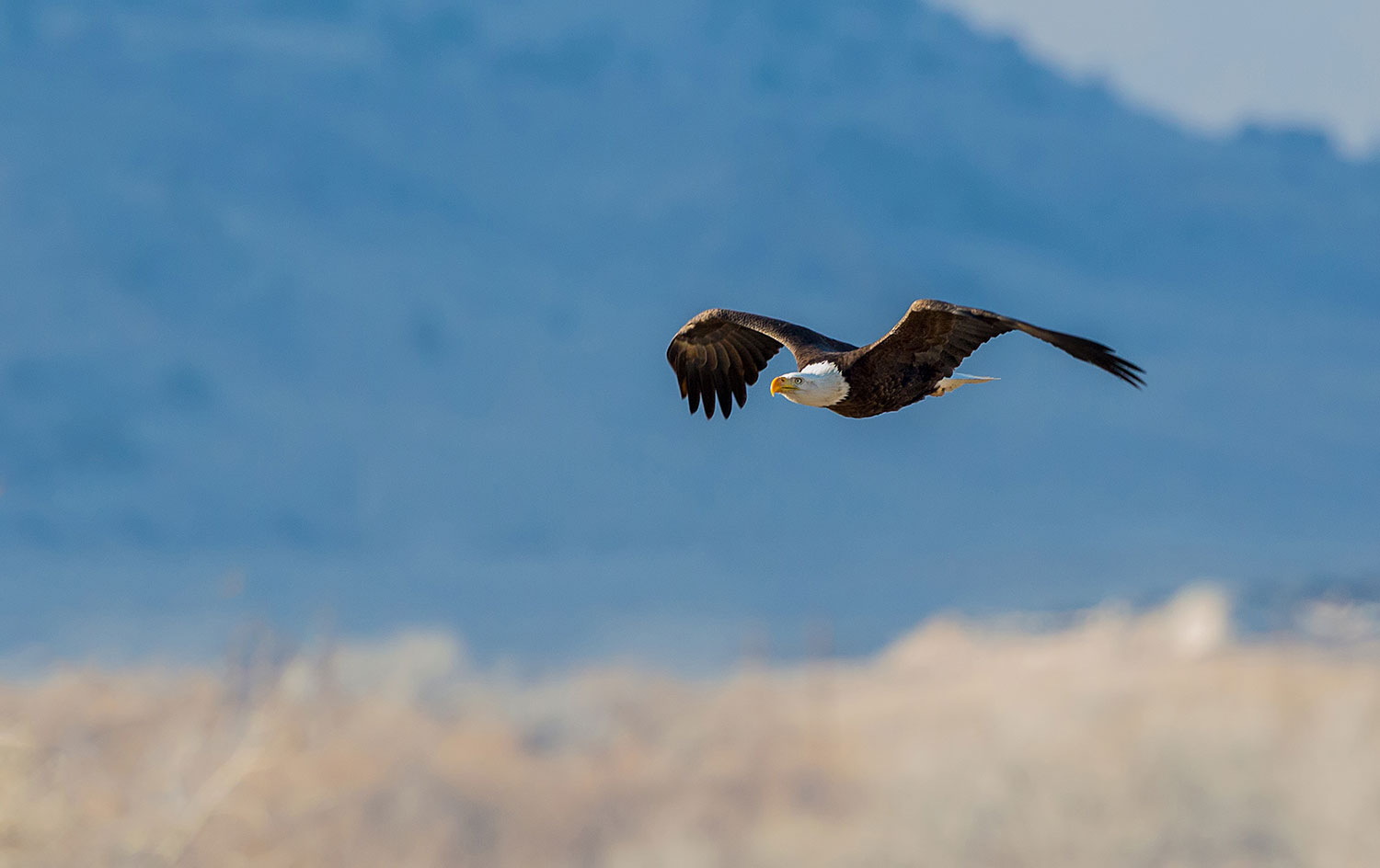 Photo 3: Tagged male flying toward the nest tree in 2014.

The new Hygiene pair lived close to a well-traveled rural road, and they quickly became well-known to bird enthusiasts and photographers. This pair had a successful run from 2011 to 2014, producing fledglings from 2011 to 2014, but 2014-2015 saw great upheaval at the Hygiene nest. The adult male went missing in 2014 and was never confirmed to be seen again. Though another adult male soon took its place, tragedy struck in May 2015: the well-loved female was lethally electrocuted while perching on a power pole.

The new Hygiene male was left to attend two pre-fledge juvenile eagles on his own. As documented in the article linked above, a female adult Bald Eagle appeared soon after the original female was lost. After a tense period, the adult male—a newbie to nesting himself—began to accept the presence of the new female eagle. To make the story of 2015 even more complex, one of the juvenile eagles was injured, purportedly by a rattlesnake bite, and taken to a raptor rehabilitation facility. Reports of the ultimate fate of the other fledgling are conflicting, but the rehabilitated fledgling was released post-recovery near the Hygiene nest site.

We believe the pair that formed amidst the chaos of 2015 (photos #4a and #4b of the new female) is the same pair that inhabits the territory today. In 2016, their first full nesting season together, the new pair raised one juvenile eagle to fledge, although anecdotal reports suggest that this lone fledgling went missing far too early during the post-fledge period to have likely survived. 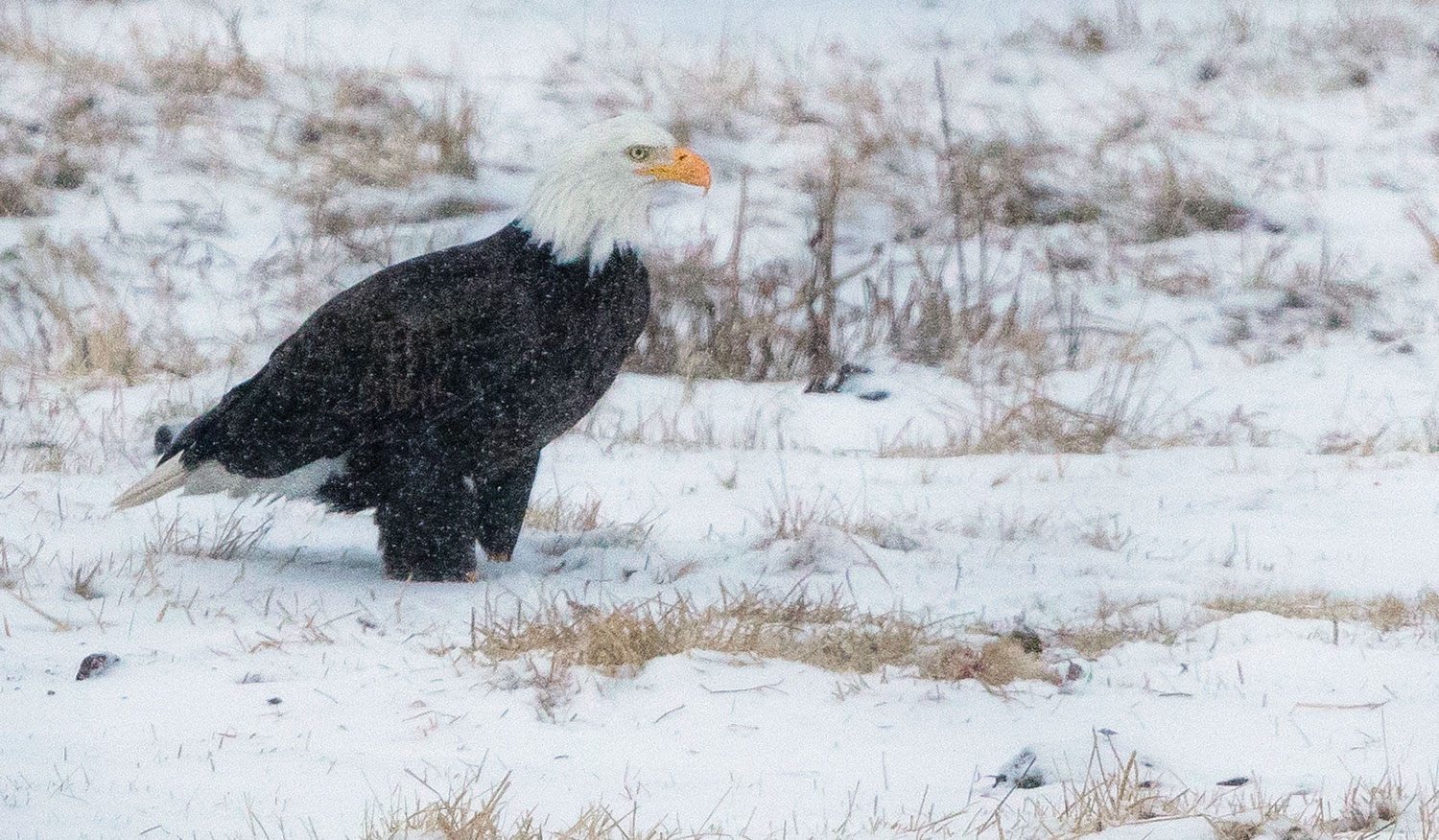 Photo 4a: Adult female in an early winter snowstorm with a freshly caught prairie dog in front of her. 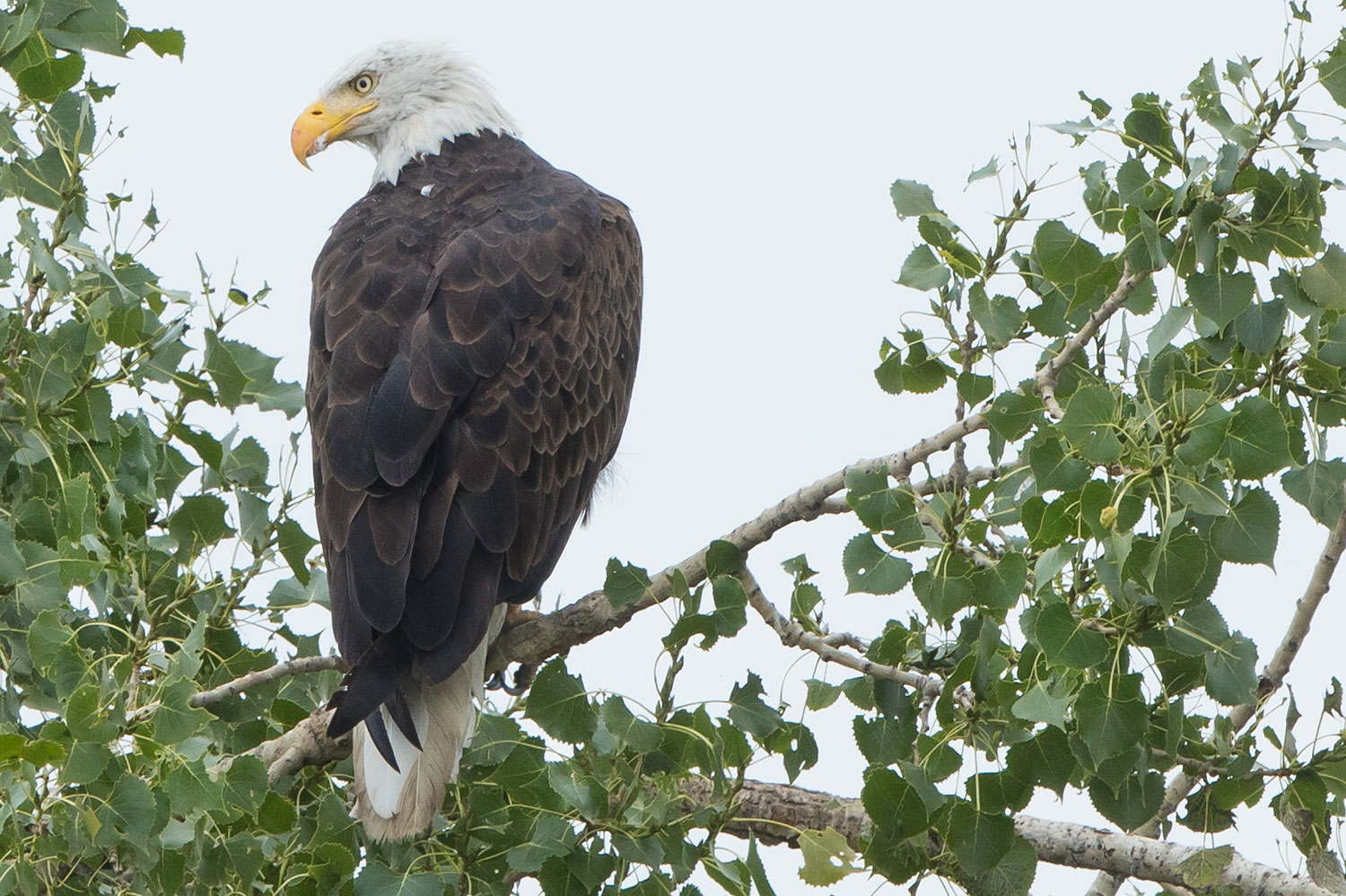 Photo 4b: Close-up of adult female.

FRNBES began initial studies of the Hygiene nest in 2016 alongside nine other Bald Eagle nests in the northern Colorado Front Range. During that season at Hygiene we conducted our first intensive documentation of the post-fledge dependence period, the critical and understudied developmental stage during which juvenile Bald Eagles are capable of flying but remain dependent on their parents for survival (we now study this period annually at several other nests).

The youngest of the two 2016-2017 juvenile eagles may have initially flopped rather than fledged, likely spending nearly two weeks on the ground near the base of the nest tree (photos #5 and #6). Soon afterward, the grounded juvenile joined its more developed sibling for short flights out into the prairie dog-rich fields that surround the Hygiene nest tree (photo #7). Recently, a FRNBES volunteer counted 230 prairie dogs in the 120 acres of open fields immediately adjacent to the nest. These fields not only provide the Hygiene adult eagles with their primary prey source—prairie dogs—but also enable fledgling eagles a chance to practice their hunting skills (photos #8 and #9). 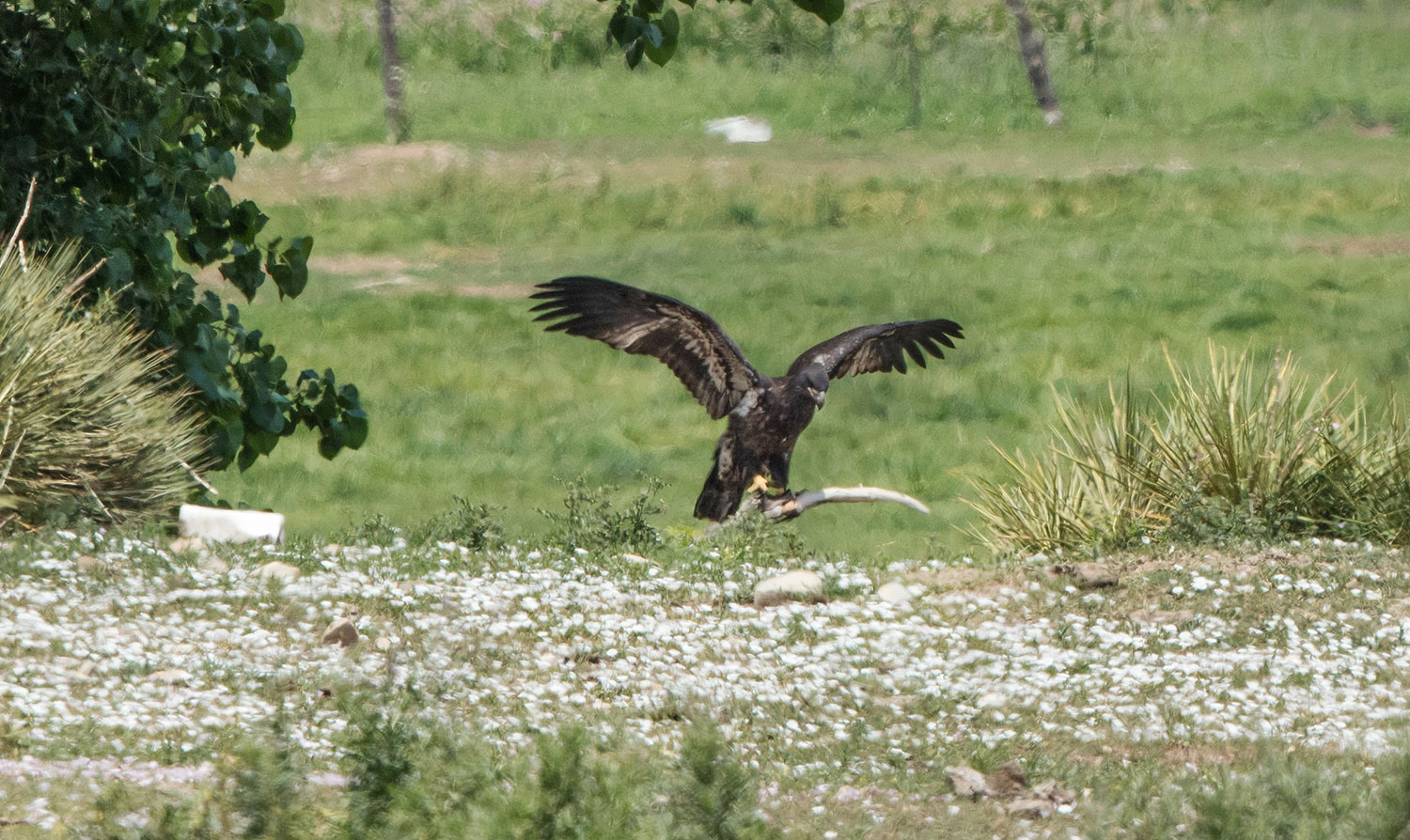 Photo 5: Grounded juvenile taking refuge on downed tree near the nest tree in 2017. 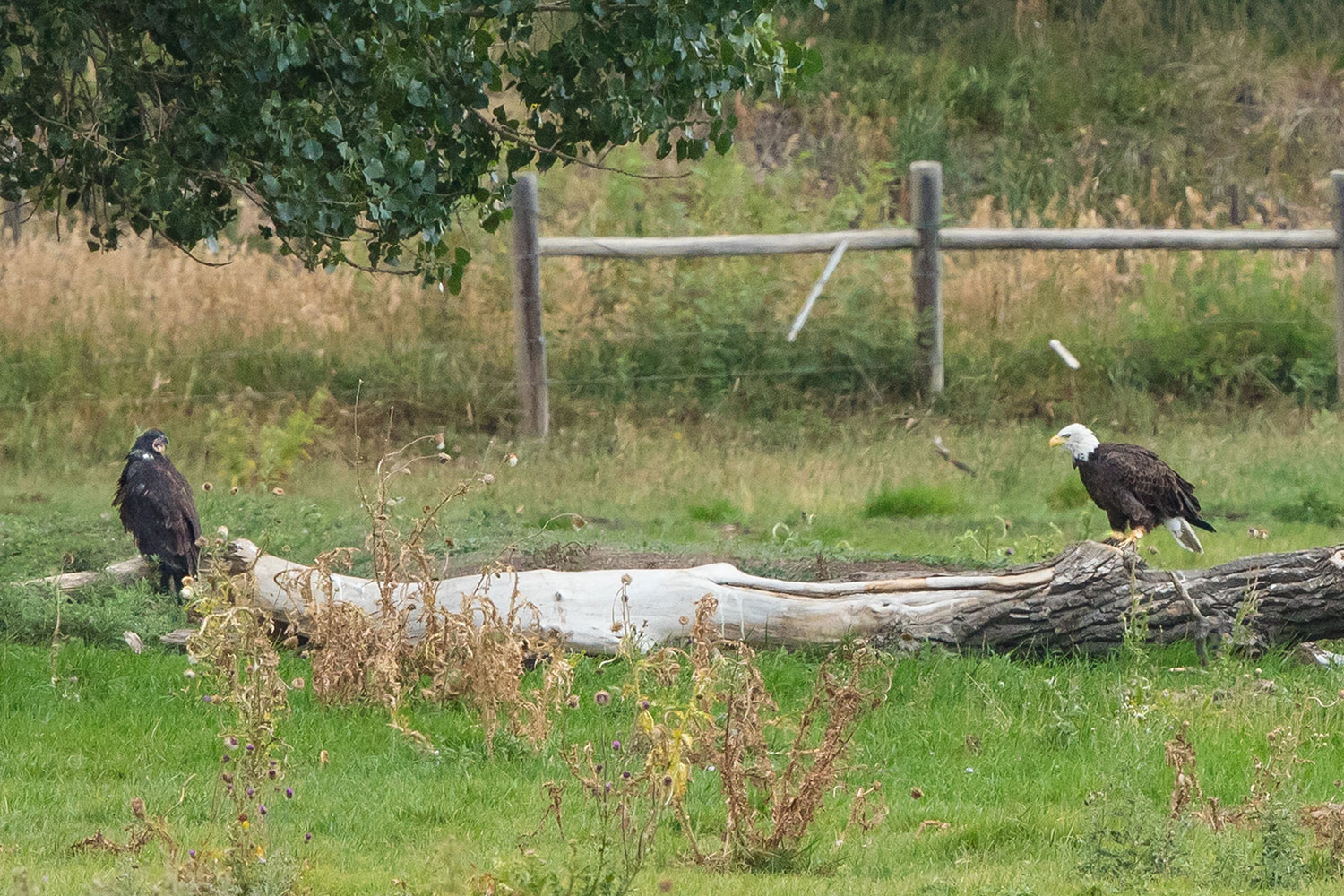 Photo 6: Adult female spending time with grounded juvenile near base of nest tree in 2017. 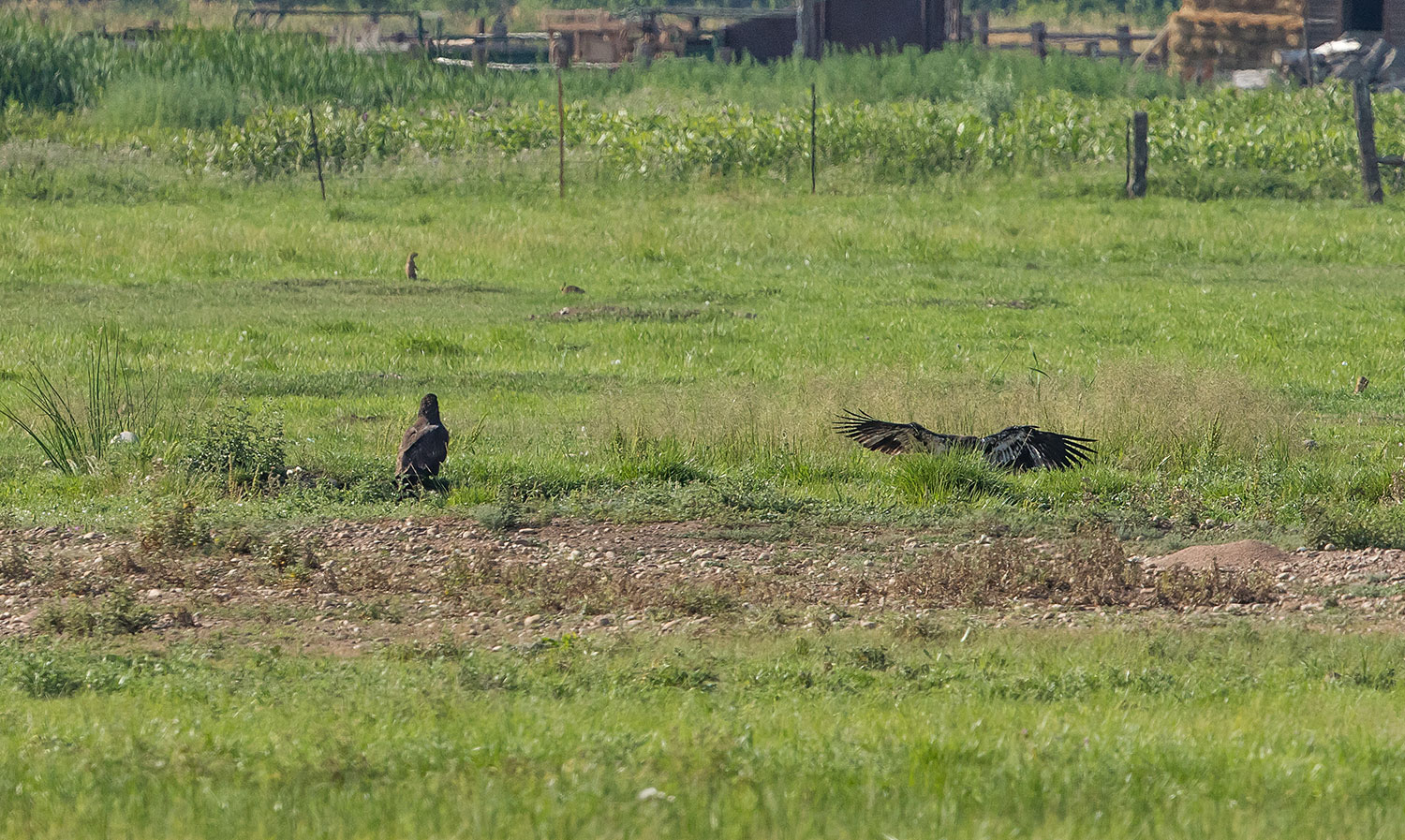 Photo 7: Sibling juvenile fledglings playing along an irrigation ditch near their nest tree; the previously grounded juvenile showing a keen interest in the nearby prairie dogs. 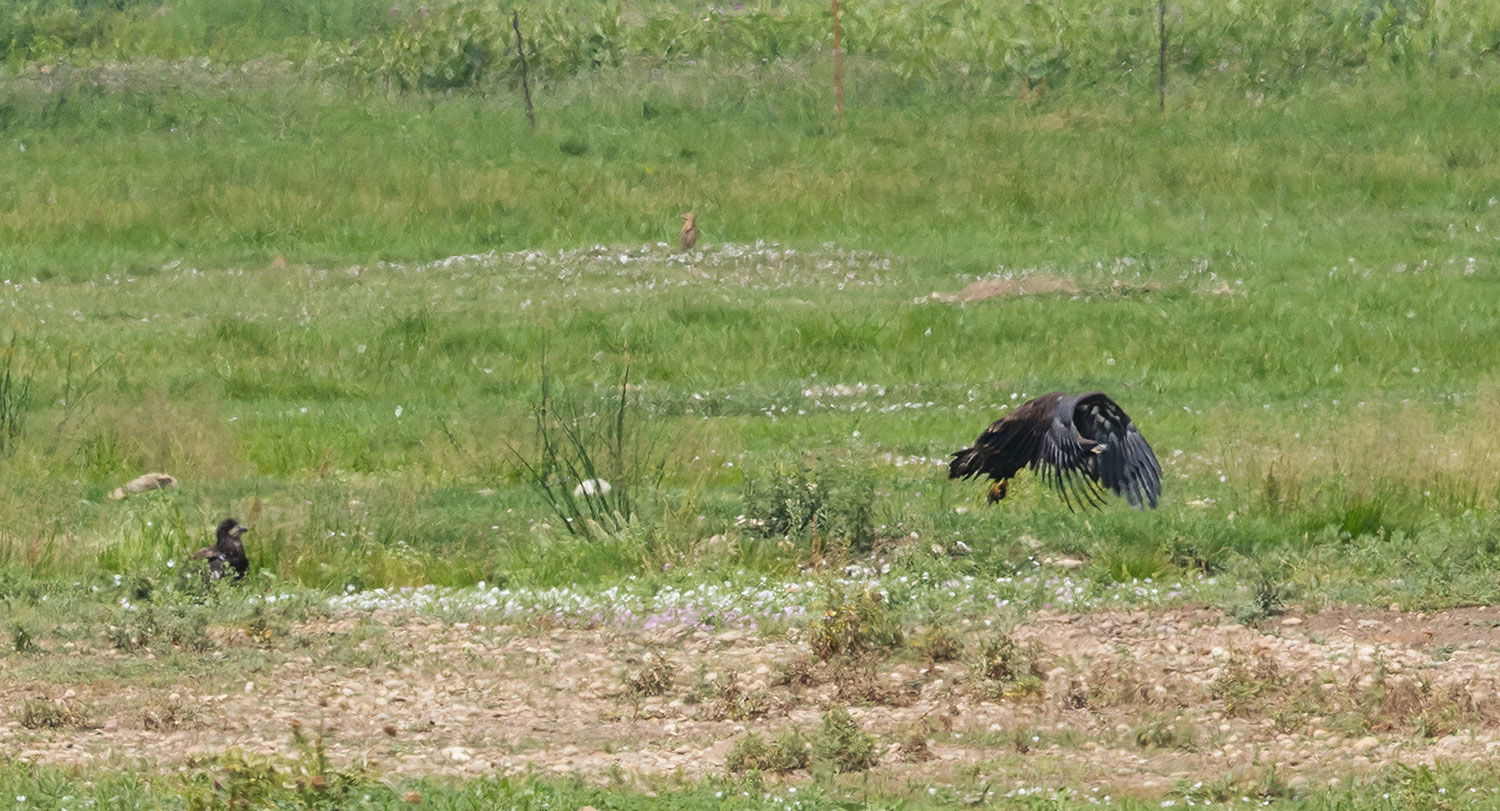 Photo 8: 2017 Hygiene juvenile after scoring a prairie dog, with sibling looking on. 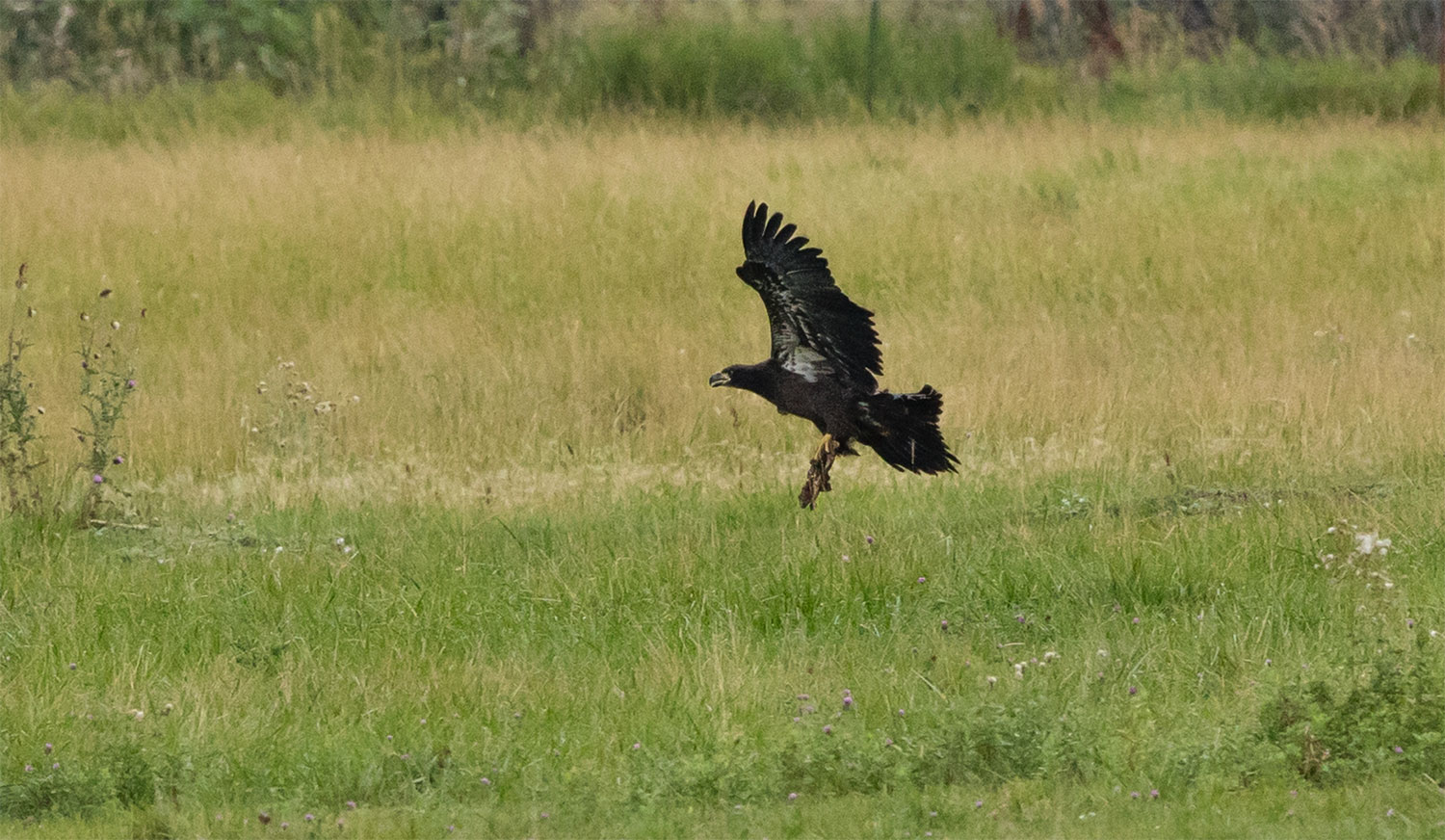 Photo 9: Juvenile Bald Eagle just prior to dispersal with a fresh prairie dog catch. This was the only prey retrieval documented in 2019 by either of the sibling juveniles. Food during the 6 to 8 week post-fledge “dependence” period is almost exclusively provided by the parent eagles.

These prairie dog colonies also provide an important prey source for Golden Eagles (photos #10-13), non-breeding Bald Eagles, and other raptors. It is always a treat to spy the solitary Ferruginous Hawk that winters in the Hygiene nest territory (photos #14 and #15), maintaining a mutualistic relationship with the eagles in these shared, prey-rich fields. 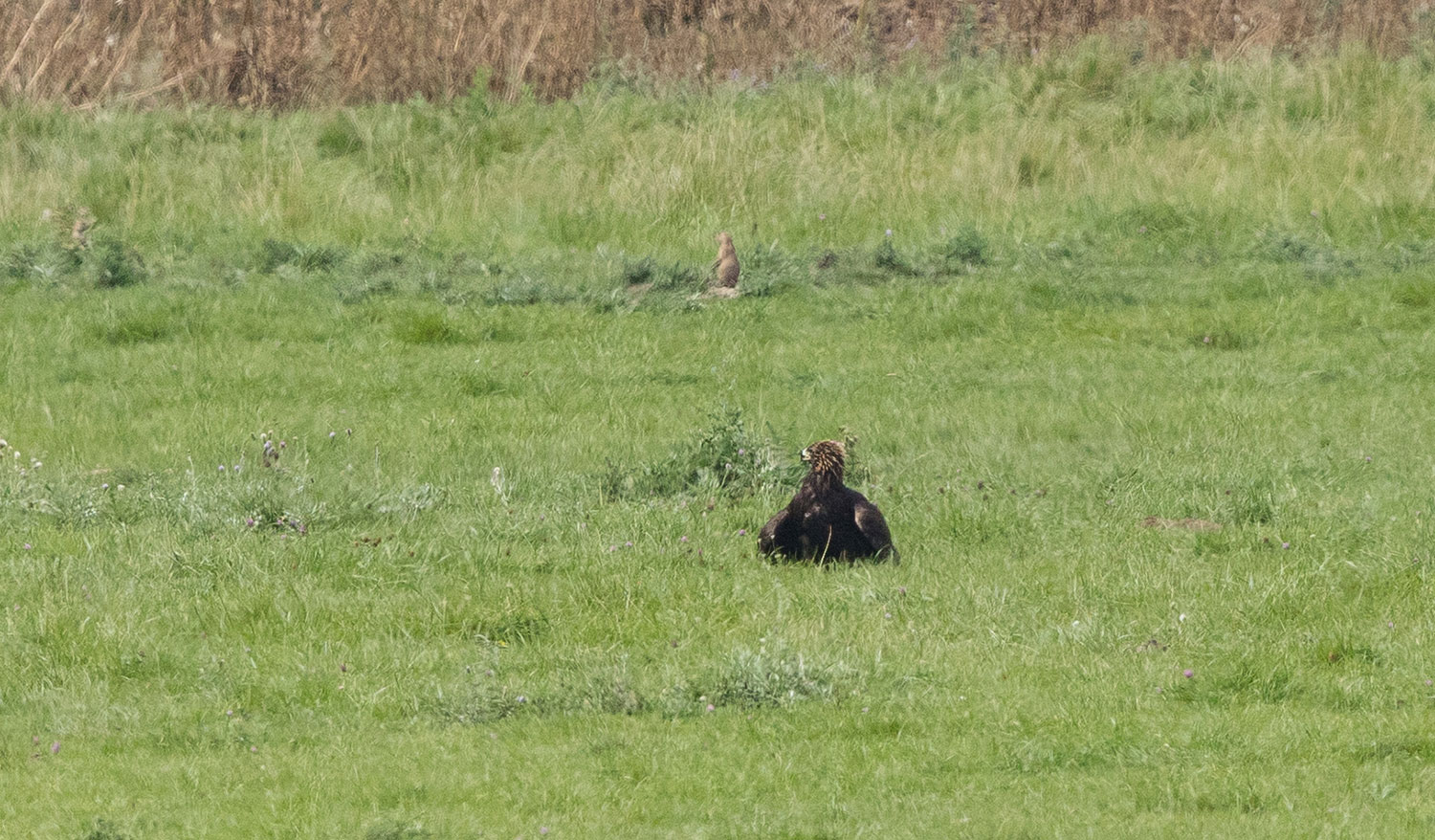 Photo 10: Juvenile Golden Eagle from a cliff nest not far away, mantling a prairie dog captured in the fields surrounding the Hygiene nest in 2017. This Golden Eagle began hunting in these fields in the days immediately following dispersal of the two juvenile Bald Eagles from the nest area. 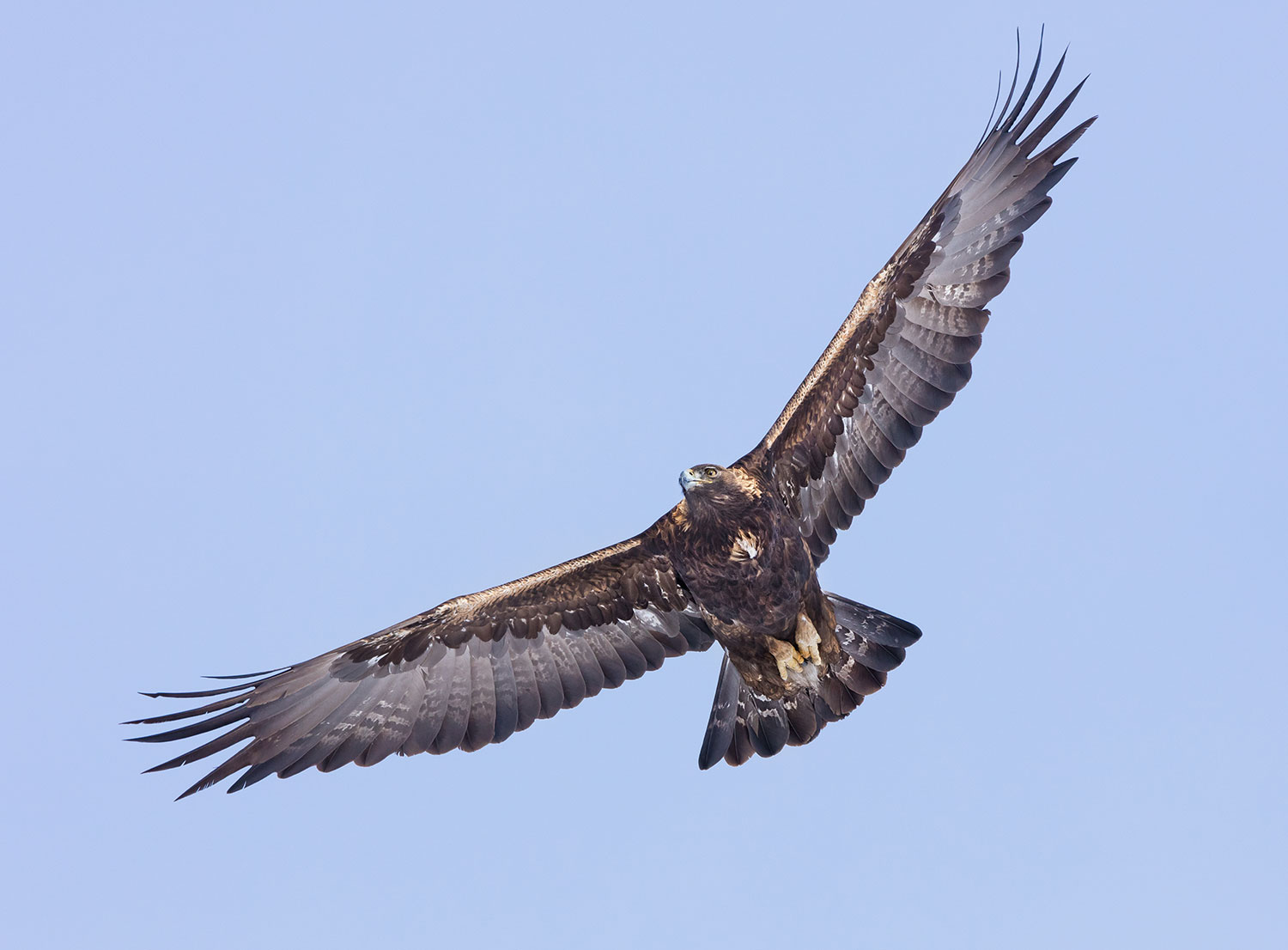 Photo 11: Adult Golden Eagle soaring over the Hygiene nest territory in 2017, just after dispersal of the two juvenile siblings. 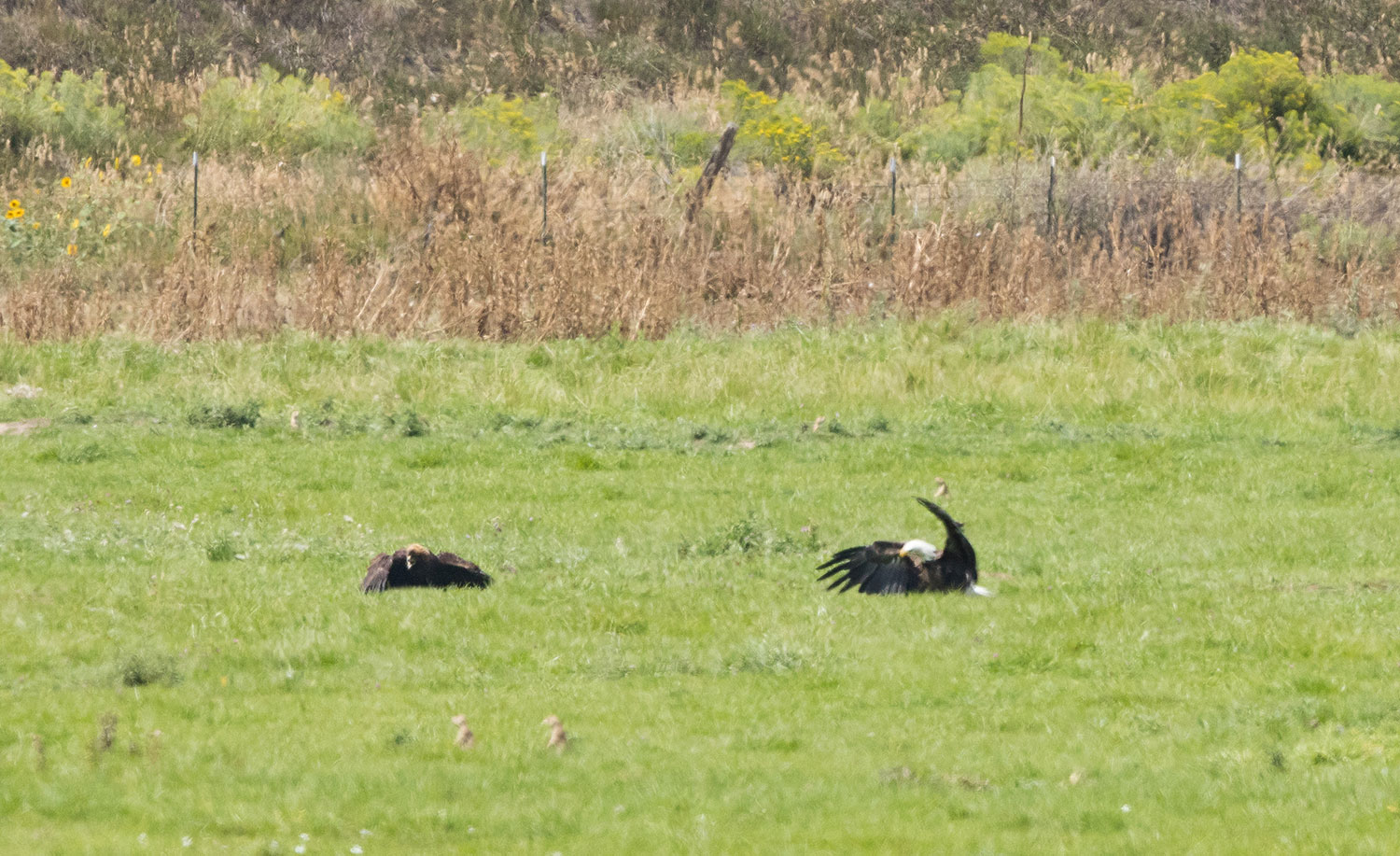 Photo 12: Male from the Hygiene pair immediately after knocking over the juvenile Golden Eagle that was feasting on a prairie dog near his nest tree. 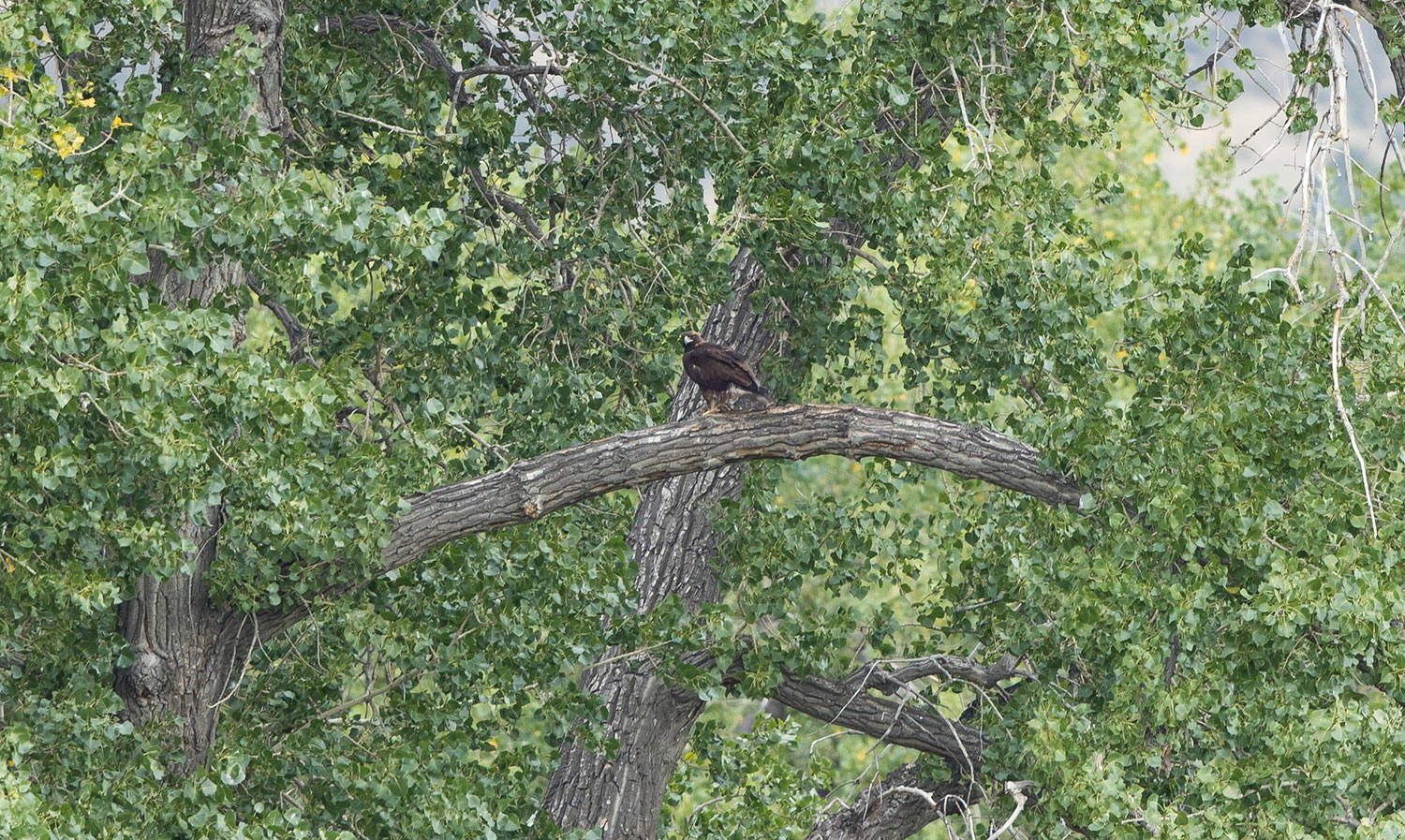 Photo 13: Juvenile Golden Eagle on the Bald Eagle’s “feeding” branch in a lower section of the Hygiene nest tree. This same eagle was frequently observed hunting near the Hygiene nest in the week following dispersal of the two Hygiene juveniles in 2017. 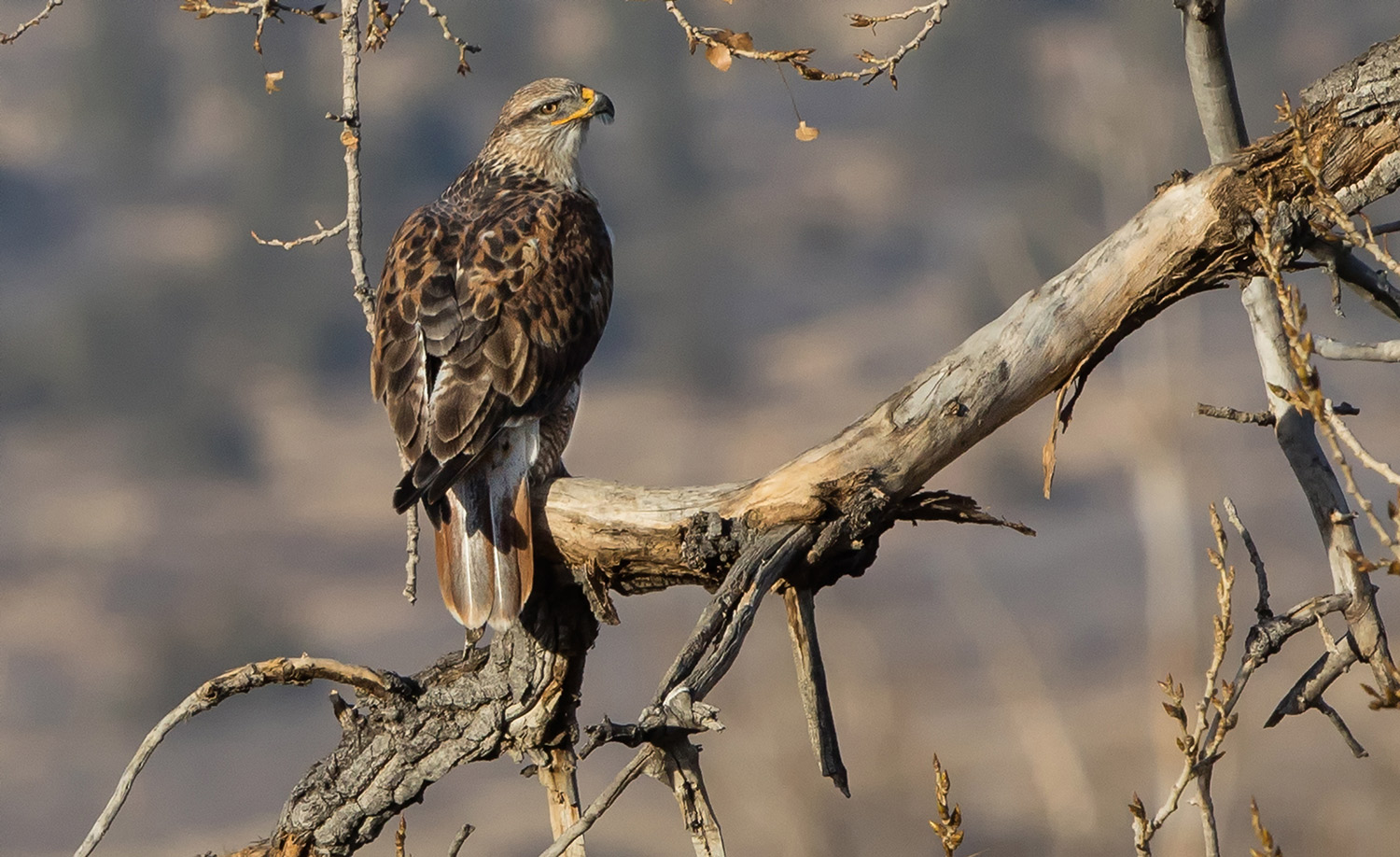 Photo 14: Ferruginous Hawk that wintered in the Hygiene Bald Eagle nest territory. Ferruginous Hawks are strongly dependent on prairie dogs and find the protected areas around some Bald Eagles nests in the Front Range a great place to winter, forming a mutualistic relationship with the resident Bald Eagles. 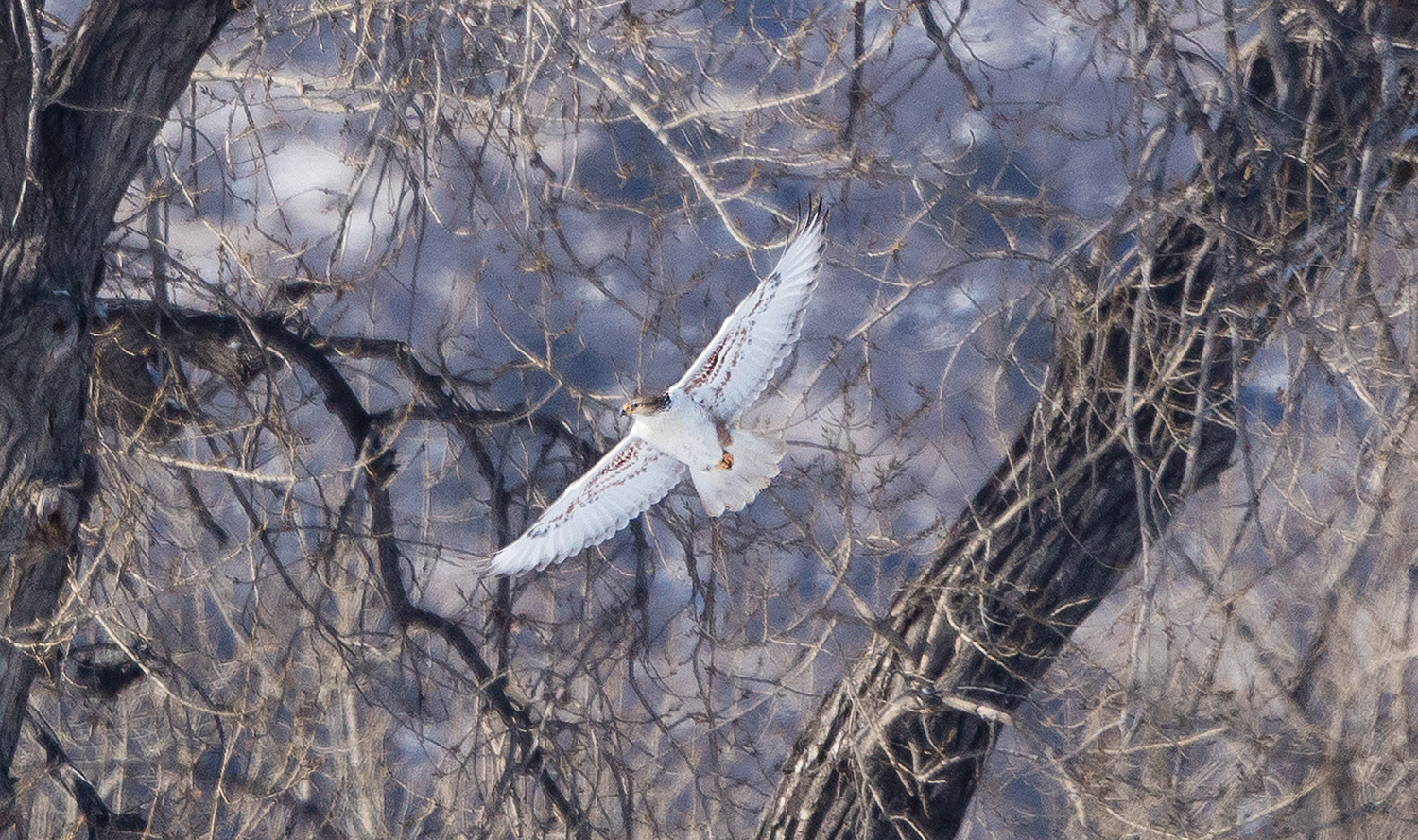 By late in the 2017 post-fledge period, wind and neglect had stripped the Hygiene nest down to just one remaining stick (photo #16). The pair seemed content to leave the nest in that condition for more than a month, but by late October, nest reconstruction started with a flurry of activity, and a new nest was nearly complete by late November to early December (photo #17). This is rather late for eagles in the northern Front Range.

Nesting season for the Hygiene pair begins about 1 ½ – 3 weeks later than for other eagle pairs in our study area. This applies to both nest maintenance and building, and also to egg-laying, incubation, and rearing of the nestlings.

It may be that after juvenile eagles disperse from their care, each pair of adults needs some time to rest before beginning the cycle again. 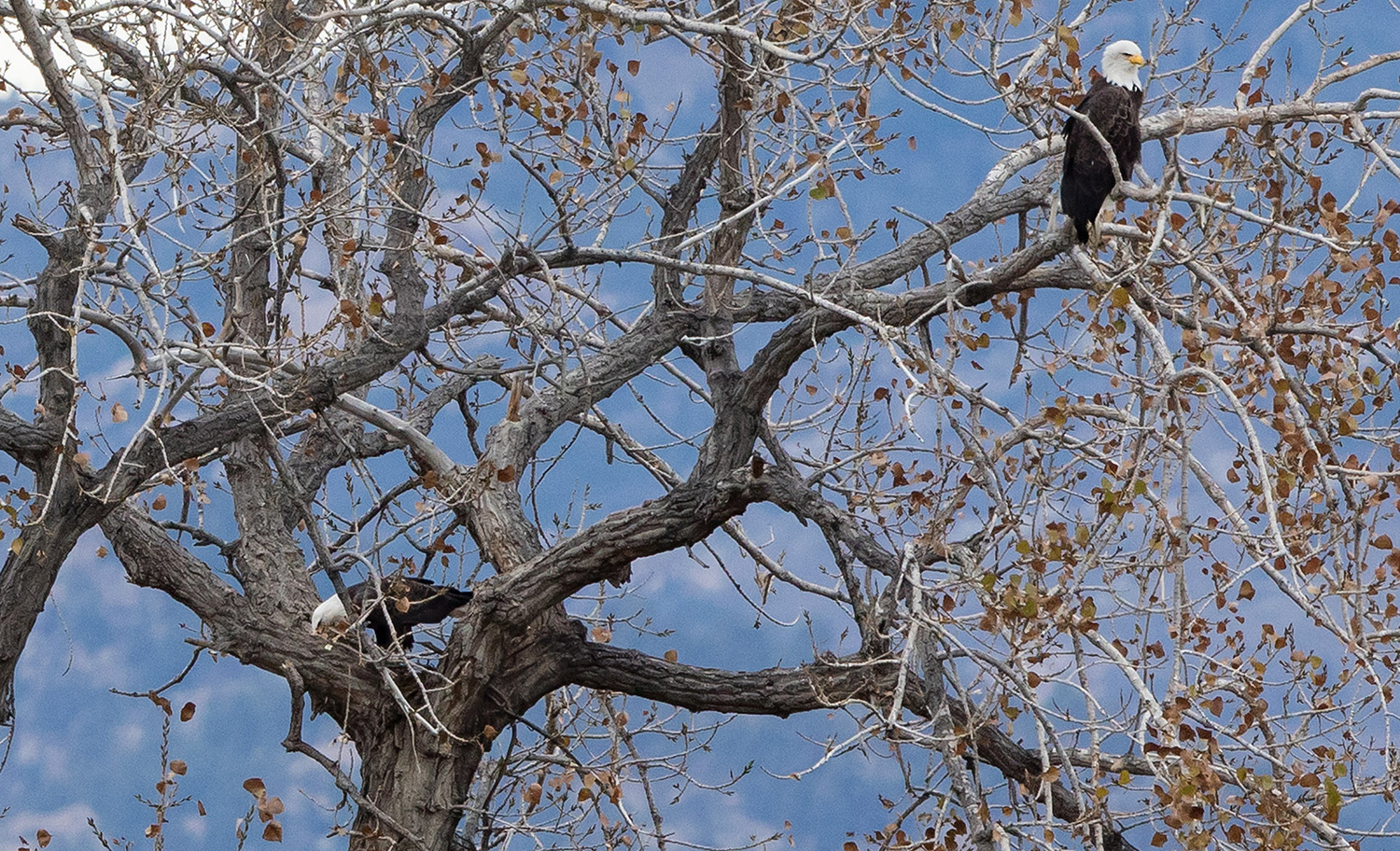 Photo 16: Female adult during initial nest rebuilding (late October, 2017) after winds and neglect during the post-fledge season left no trace of the original nest built in 2010. 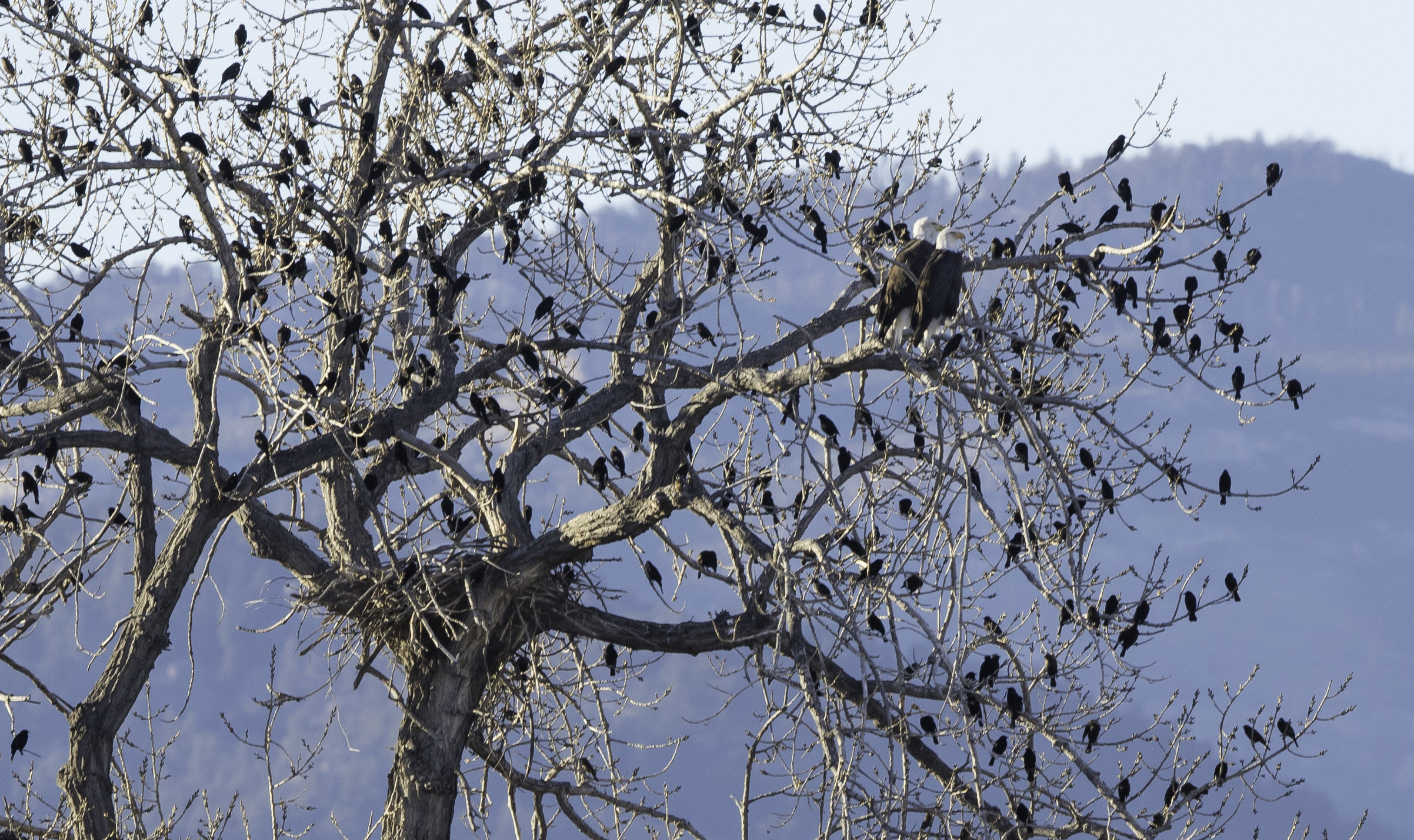 Photo 17: By mid-November of 2017, the Hygiene eagles had a nearly completed nest, which looked very much like this photo taken in early December, 2017.

In March 19, 2018, two weeks after the Hygiene female laid eggs, we observed an attempted takeover of the nest by a non-breeding adult Bald Eagle (photo #18). While the resident pair fended off the intruder, the eggs must have been destroyed during the struggle. The pair copulated several times after the eggs were lost, but a second clutch of eggs was not laid that spring. Though shocking to some, attempted nest takeovers are not uncommon: in the spring of 2020, wildlife cameras dramatically captured a similar event at a nearby Standley Lake nest that resulted in the loss of eggs and the disappearance of the female. Despite their nest failure, the Hygiene eagles remained in their near-nest area during the following summer and fall like all territorial pairs that we study. 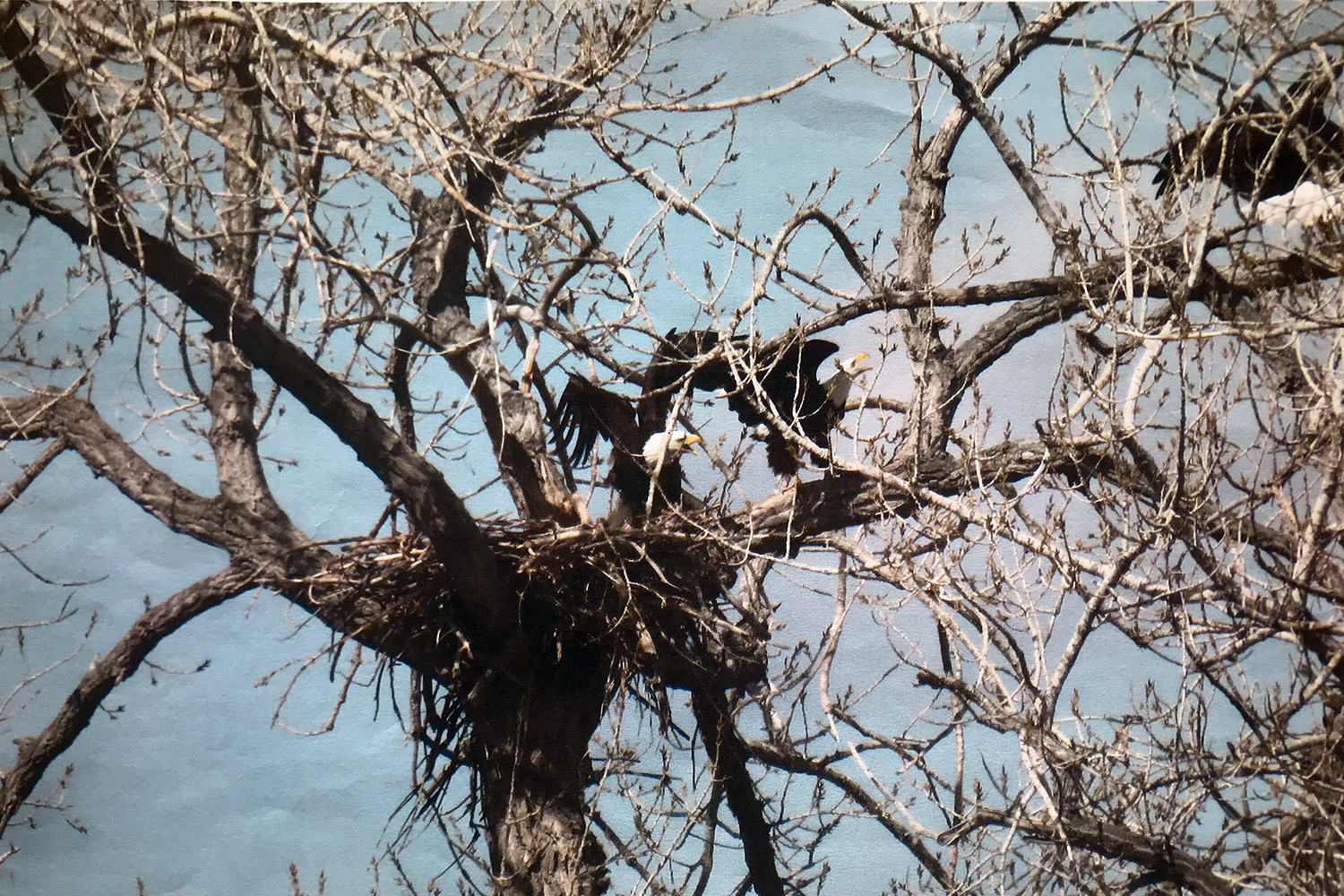 Photo 18: The Hygiene Bald Eagle pair in their nest on March 19, 2018 defending eggs and nest from a determined, non-breeding adult eagle (upper right of the photo). The eggs were likely destroyed during this skirmish, and incubation ceased immediately afterward.

The Hygiene pair successfully fledged two juveniles in 2019 (photos # 19 to 23), and FRNBES once again documented the post-fledge behavior of this eagle family up until dispersal, which was in early September. In 2020, the Hygiene nest had a hatch of one or two chicks; however, both were lost—along with many other Bald Eagle chicks in the Front Range—during an intense snowstorm on April 17. FRNBES is committed to the study of nesting Bald Eagle throughout the entire year, and we will continue to update all of you on the Hygiene pair’s activities. 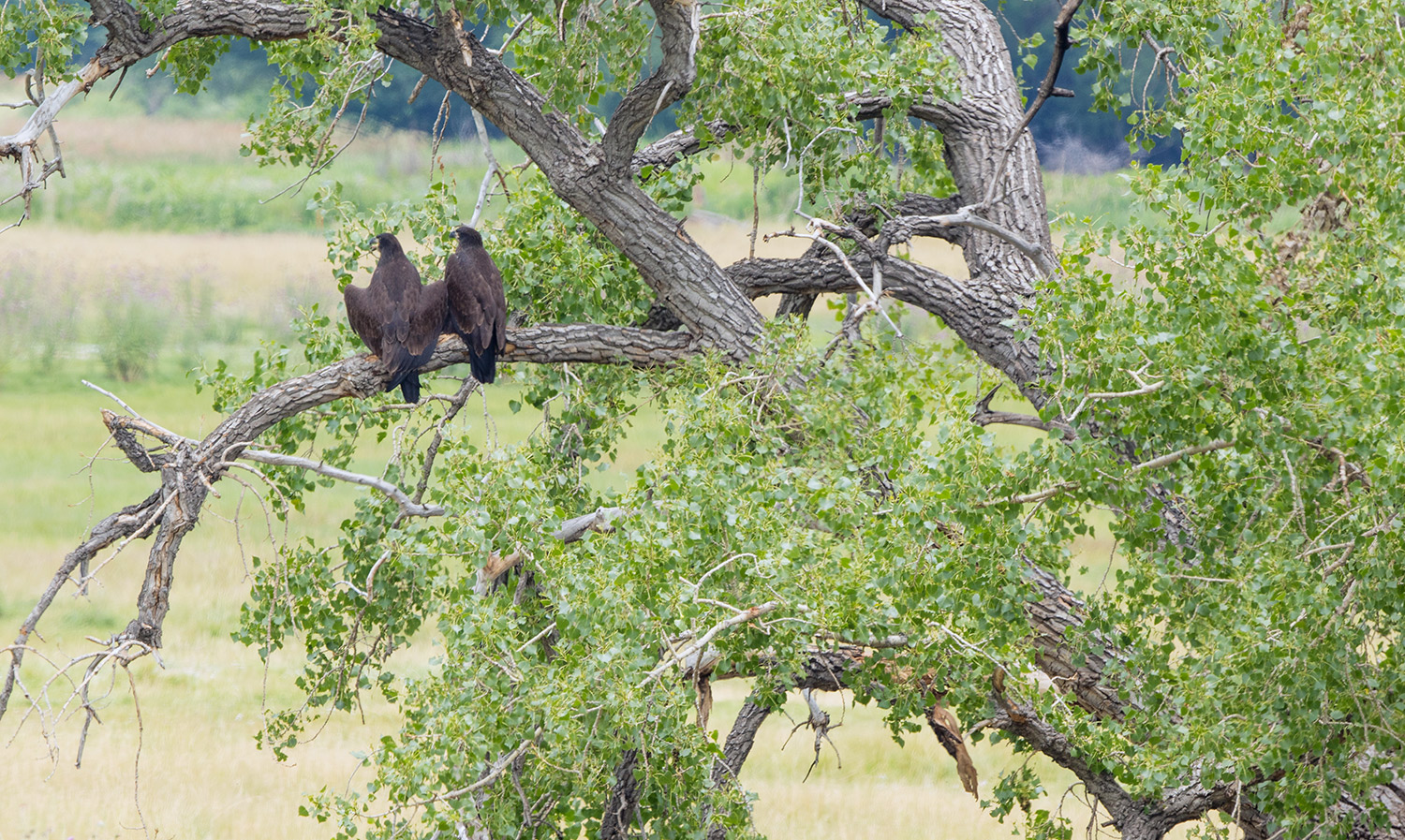 Photo 19: Juvenile siblings during the summer of 2019 enjoying each other at a favorite perch. 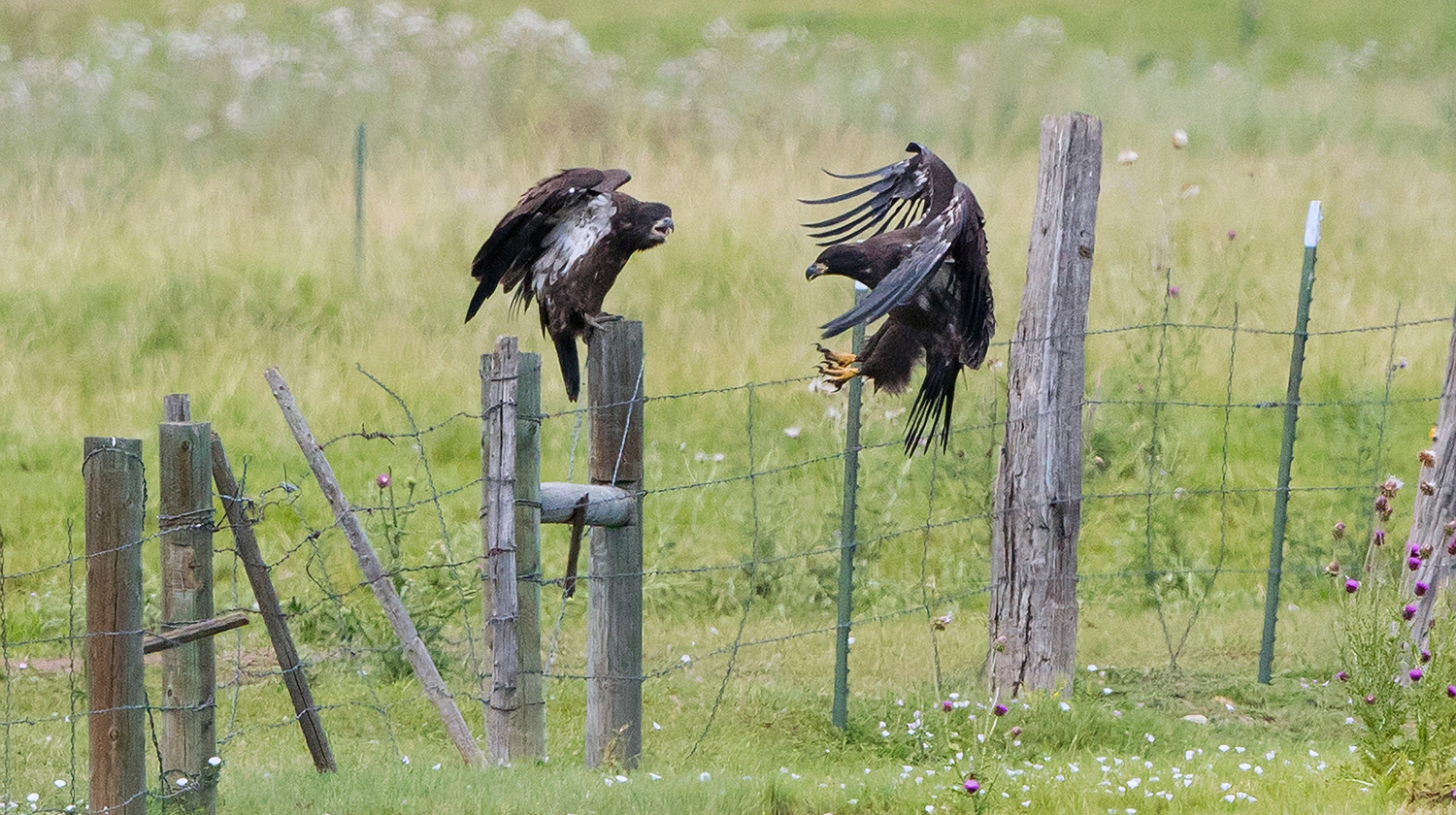 Photo 20: Close call with barbed wire, as the dominant 2019 juvenile (JV1) flies in to accompany its sibling. 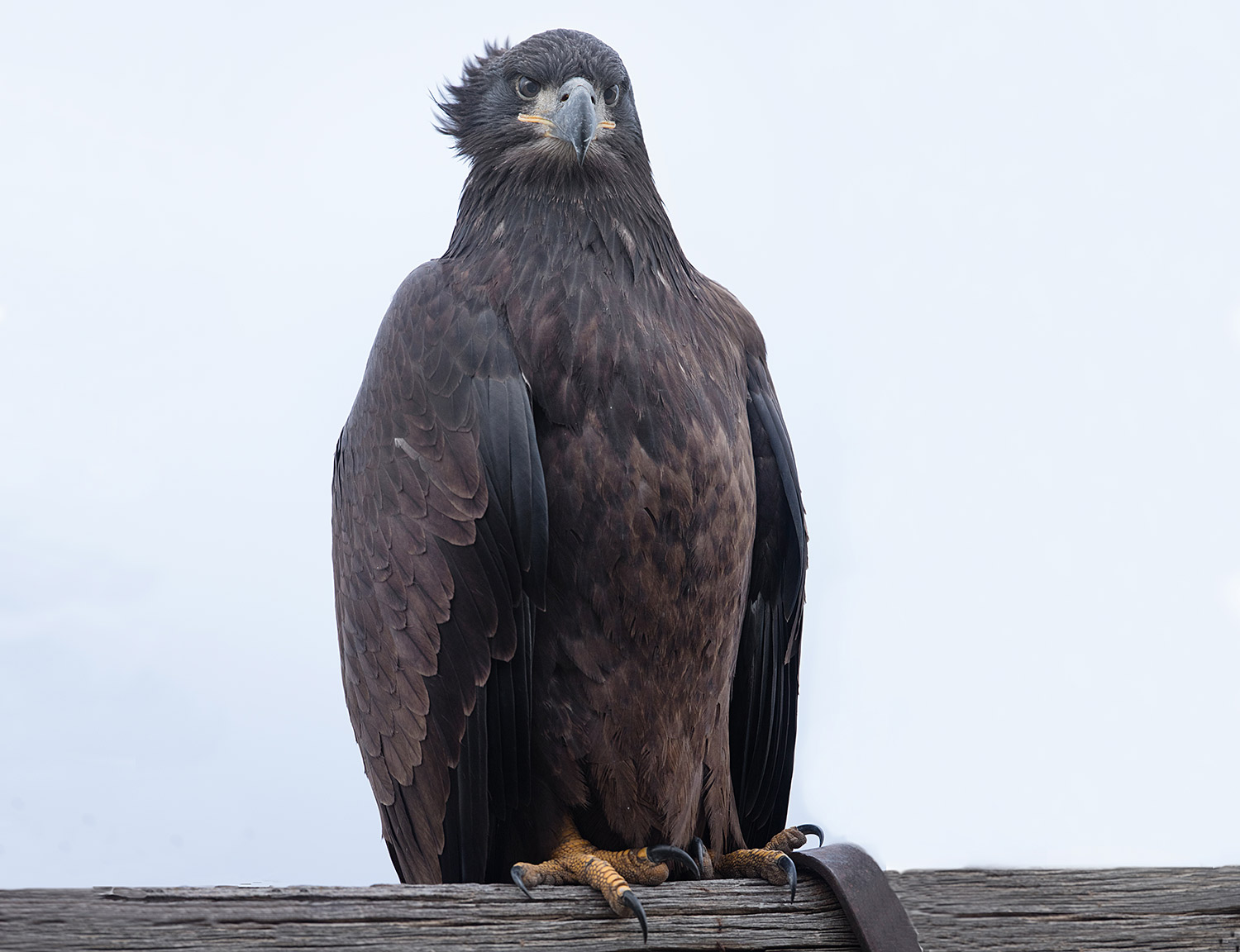 Photo 21: Intimate visit by JV1 in 2019 after this juvenile landed just above our observation station. 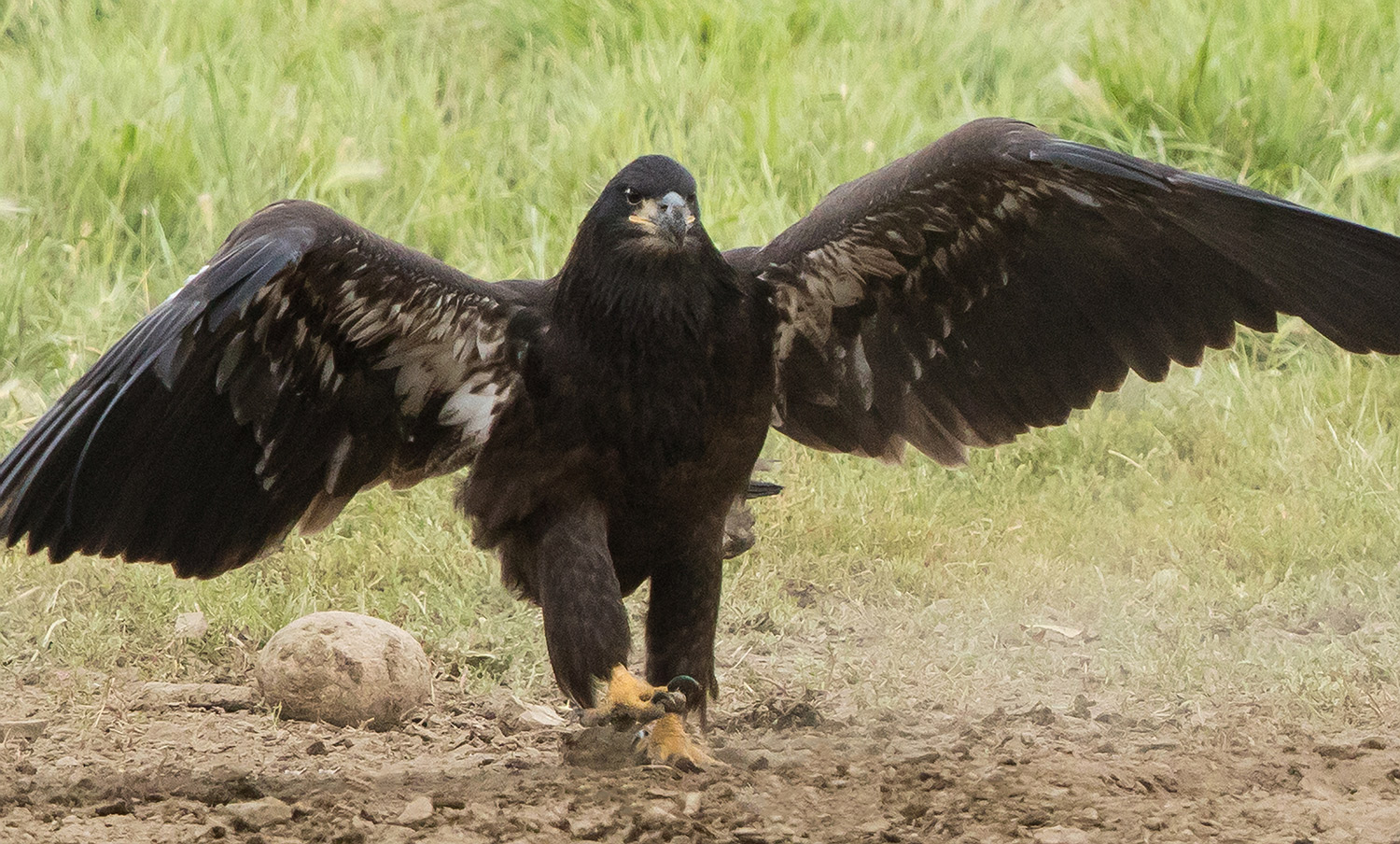 Photo 22: Juvenile in 2019 strutting its stuff near our observation site. 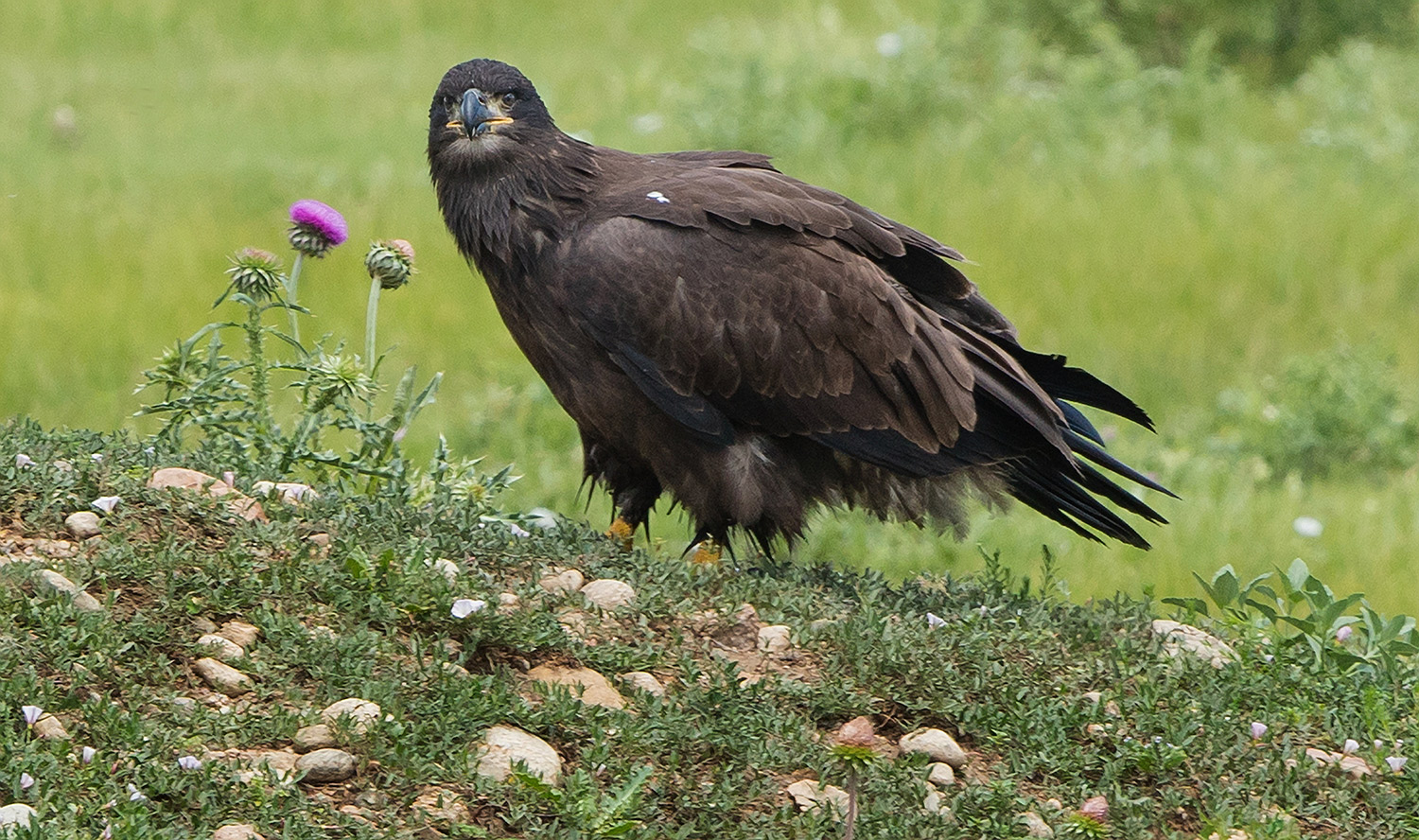 Photo 23: JV1 in 2019 near an irrigation ditch in the fields surrounding the nest tree.

While the Hygiene nest is located on conserved Boulder County Open Space land, there are still two major threats to the nest. The first originates beneath the soil: Martin-Marietta-Materials owns the mineral rights to the property, and it plans to dig a 600-acre gravel quarry on the site. Initial plans from 2016 included digging within 300 feet of the nest tree. Local activists have forced Boulder County to reconsider the project’s permit, putting activity on hold for the next several years.

If approved, the operation would have a devastating impact on the nesting eagles. FRNBES studies document that Prairie Dogs comprise a minimum of 38 percent of the Hygiene Bald Eagle’s prey (photos #24 and #25). Many of these prairie dogs are derived from colonies adjacent to their nest tree that would be destroyed by the gravel operation. This would also hurt other raptors: A Ferruginous Hawk, which is a state species of special concern, relies on this prey-rich area, as do Golden Eagles and many other raptor species.

The second major threat comes from current uses of the property. Under the land use plans of Boulder County Parks and Open Space, the Hygiene eagles’ primary food source is unprotected from the agricultural tenants that lease the property. While federal law under the Bald and Golden Eagle Protection Act (BGEPA) prohibits interference in the feeding and foraging of eagles, county rules allow tenants to kill any number of prairie dogs, as long as they are not completely eliminated. And disturbance comes in more forms than just feeding disruption. As can be seen in photo #26, respect of the eagles on behalf of the tenants can be something of a mixed bag, and the eagles are occasionally flushed from portions of their own territory.

With hundreds of hours of field observations, we have developed a clear picture of how the Hygiene eagles use their surroundings to survive. We will continue to marshal our data to advocate for fair, holistic conservation measures that protect this rich Front Range habitat. 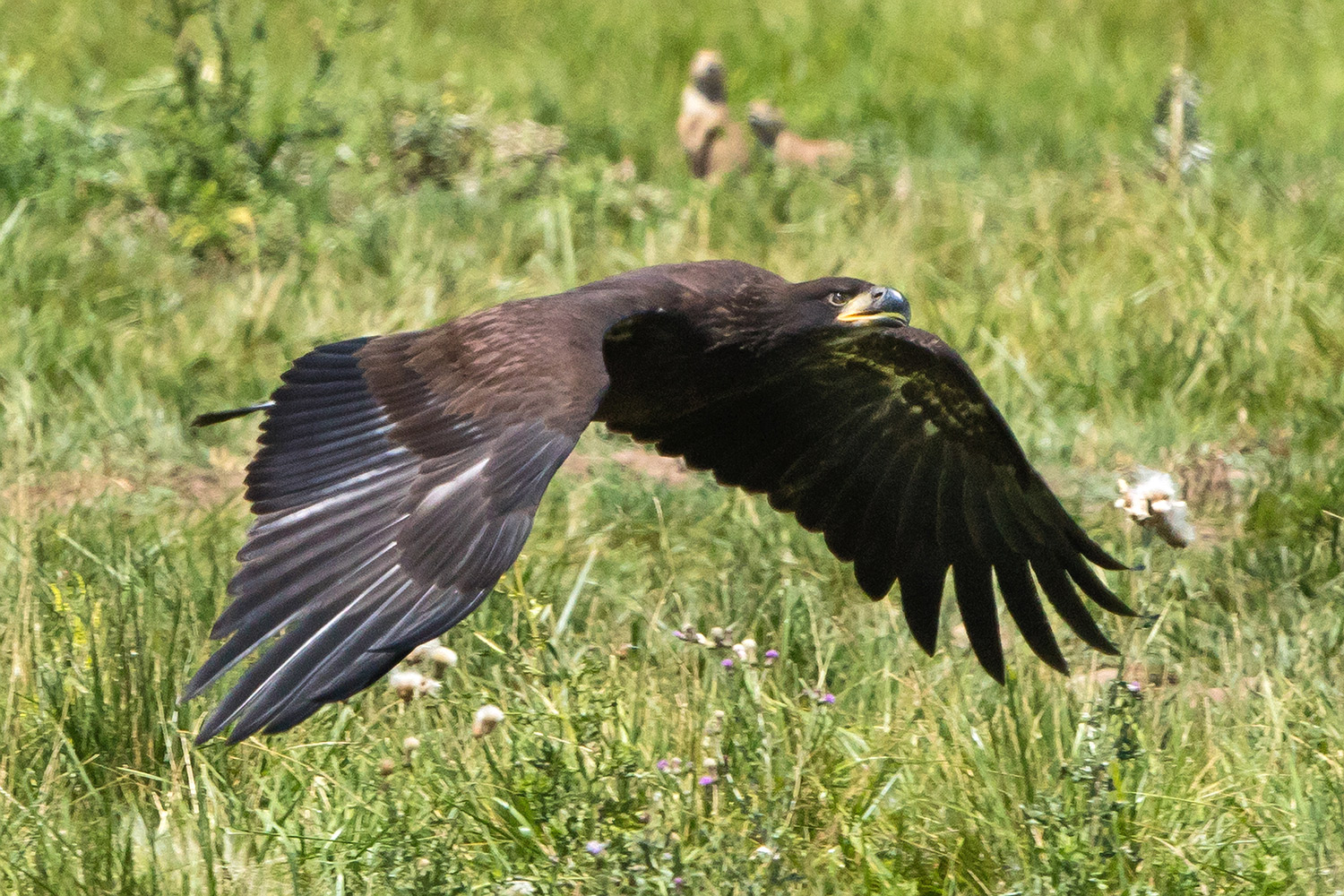 Photo 24: JV1 in 2019 flying low to a perch tree, passing over prairie dogs along the way. 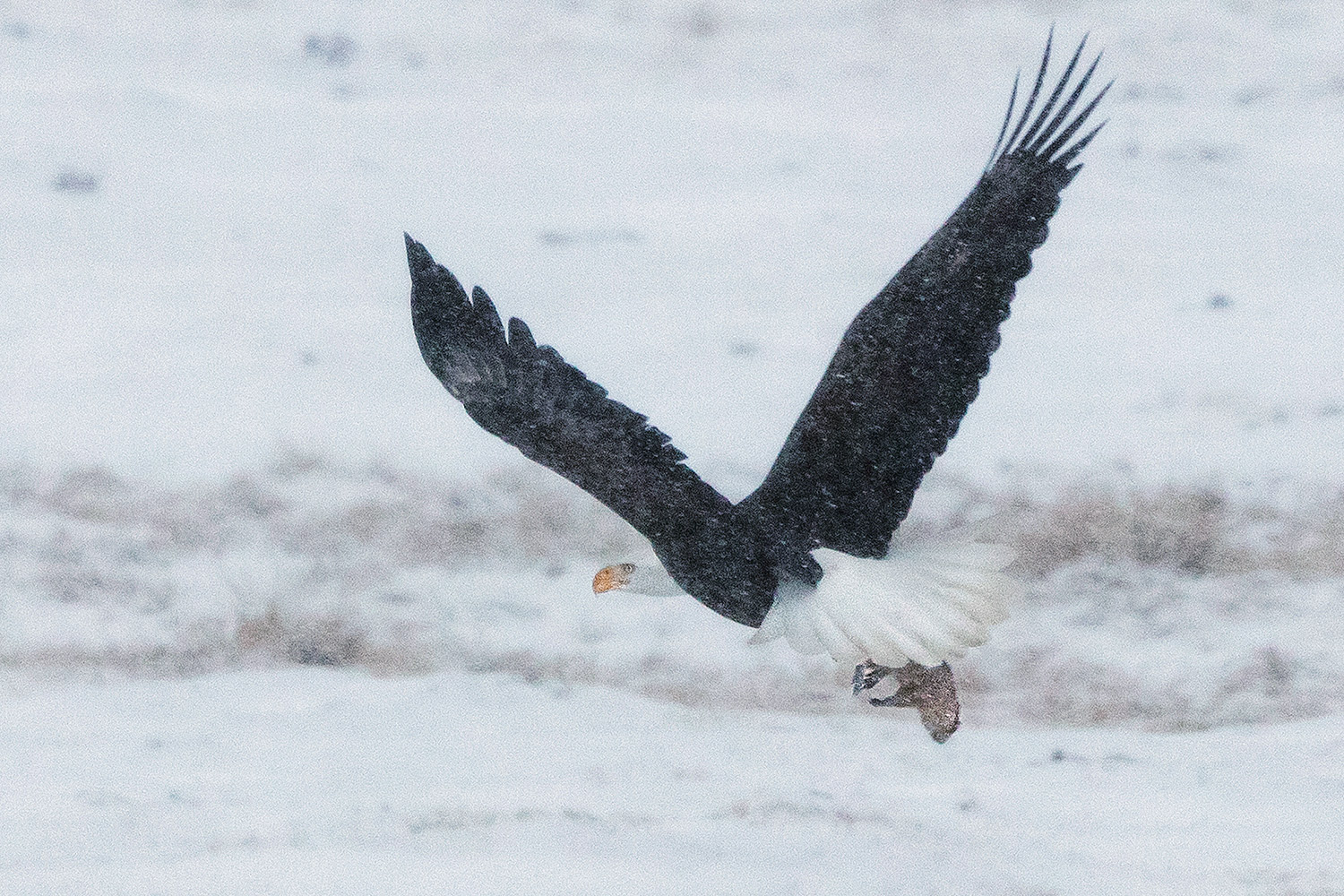 Photo 25: Adult male in the winter of 2018 after catching a prairie dog in the field near the nest tree.

Photo 26: Agricultural tenant tending to irrigation ditches. The adult eagle was flushed from its perch by the tenant’s dog. An easily avoided situation that would only require keeping the dog in the ATV while the eagles are nearby—avoiding the chase and flush of the eagles.