The Boulder Creek nest is one of the largest and most conspicuous in our study area, and aerial imagery indicates that it along with several adjacent nests were established by at least 2006.  This time frame conforms with the earliest successful Bald Eagle nest in nearby Boulder County, which was only four years earlier in 2002.

Like many other nesting Bald Eagles in the Colorado Front Range, the Boulder Creek eagles constructed their nest along a rich stream corridor with adjacent ponds and wetlands.  Many of these ponds originated from gravel quarry mining that commenced in the 1950’s, as these operations were localized along stream corridors near the mountain front. Subsequent to mining, the quarry pits filled with groundwater and many now host an abundance of fish. Due to the decimation of Bald Eagle populations by DDT through much of North America—beginning around 1941–Bald Eagles were rarely noted in the Front Range until the early 1980’s. After that point, Bald Eagles began taking advantage of fish within these quarry ponds, along with a plethora of other resources along these verdant stream corridors. 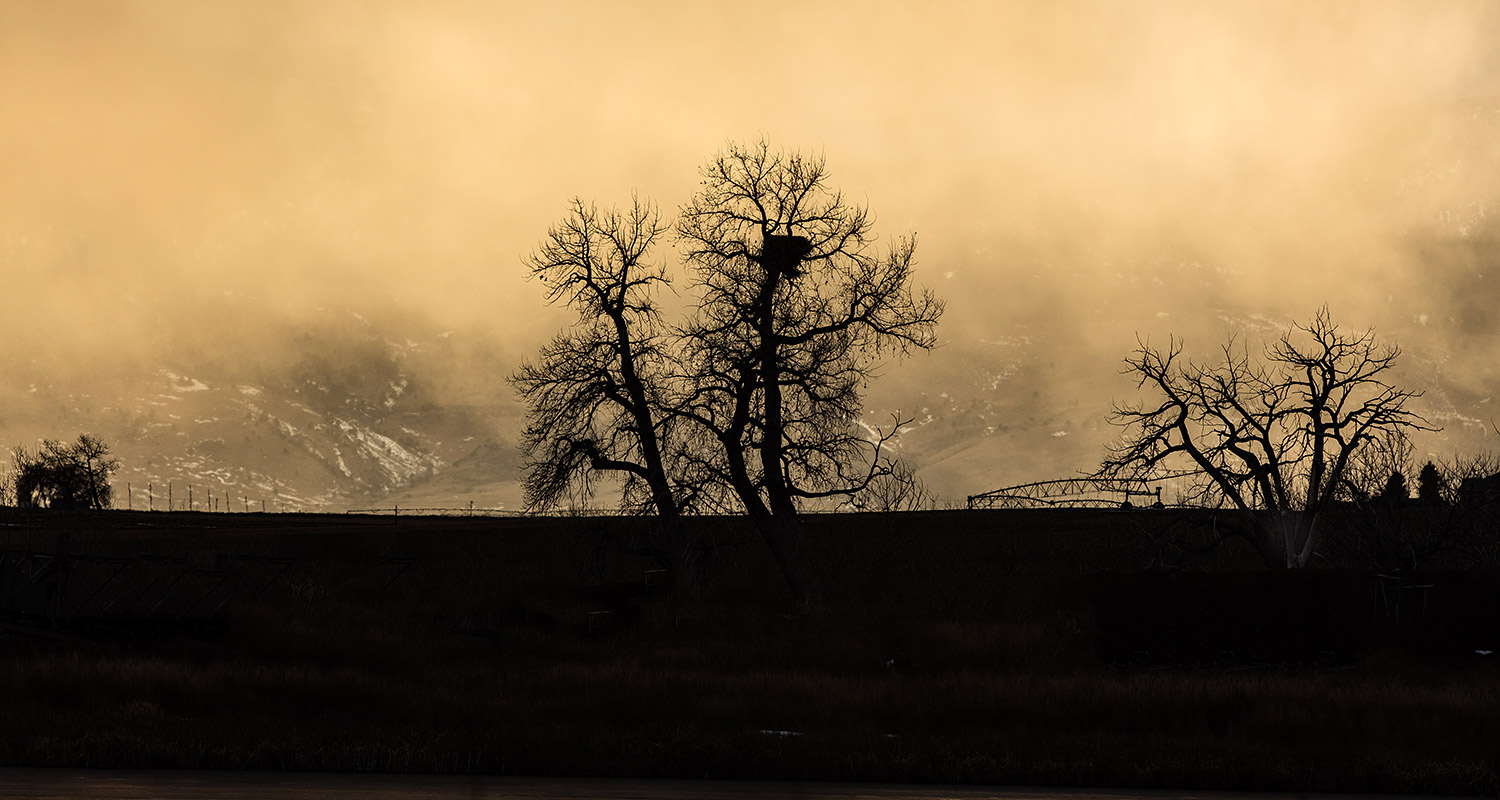 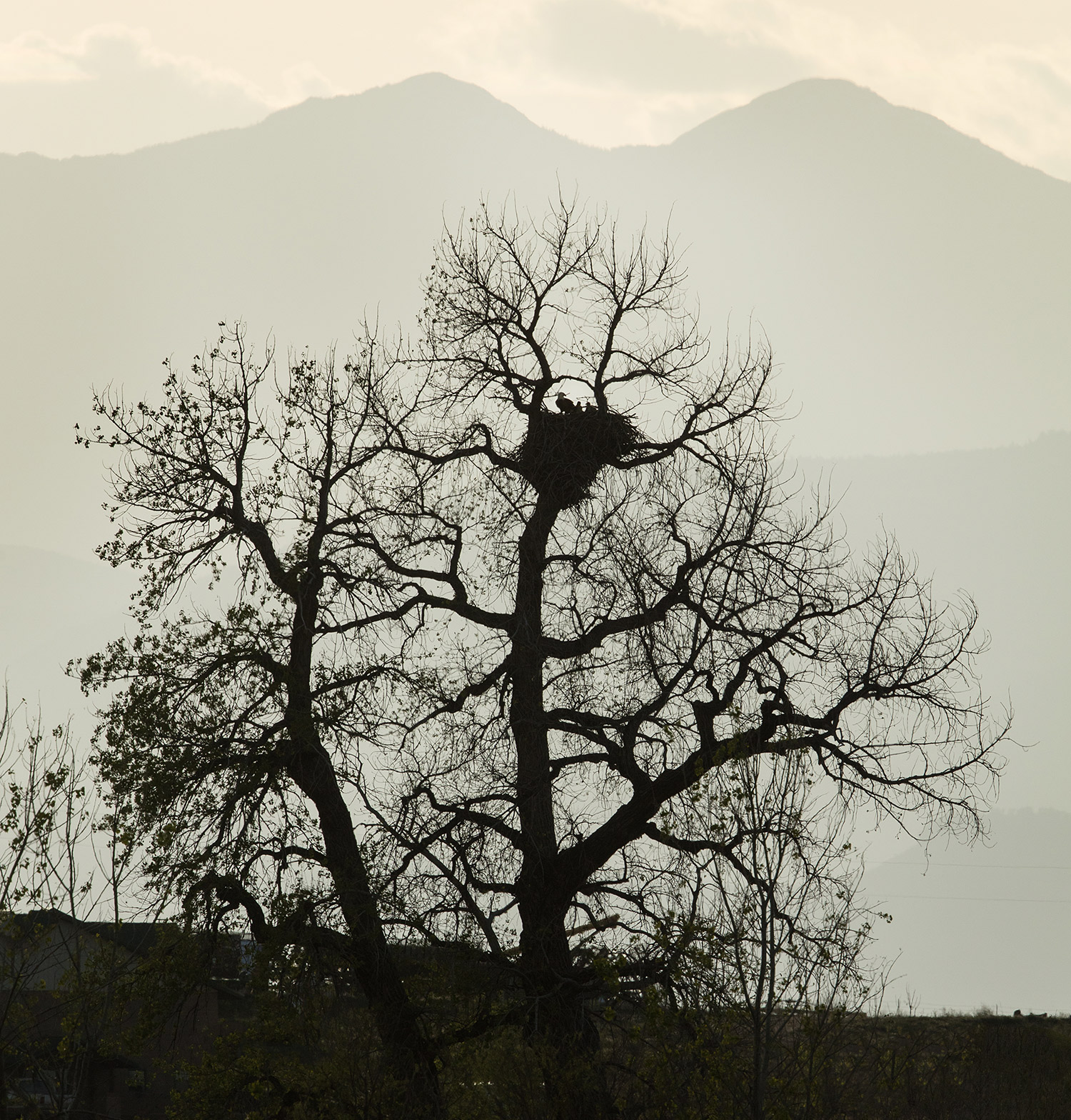 Female adult and both young eaglets in nest (2019)

Although several gravel quarry operations were present in the area south of the Boulder Creek nest prior to 1999, gravel mining did not occur in the current nest area until about 2002. It is unlikely that nesting occurred between 2002 to 2004, as gravel operations were active close to the nest tree during that time frame. By 2006, gravel mining had moved northward, leaving enough undisturbed territory to establish a successful nest. 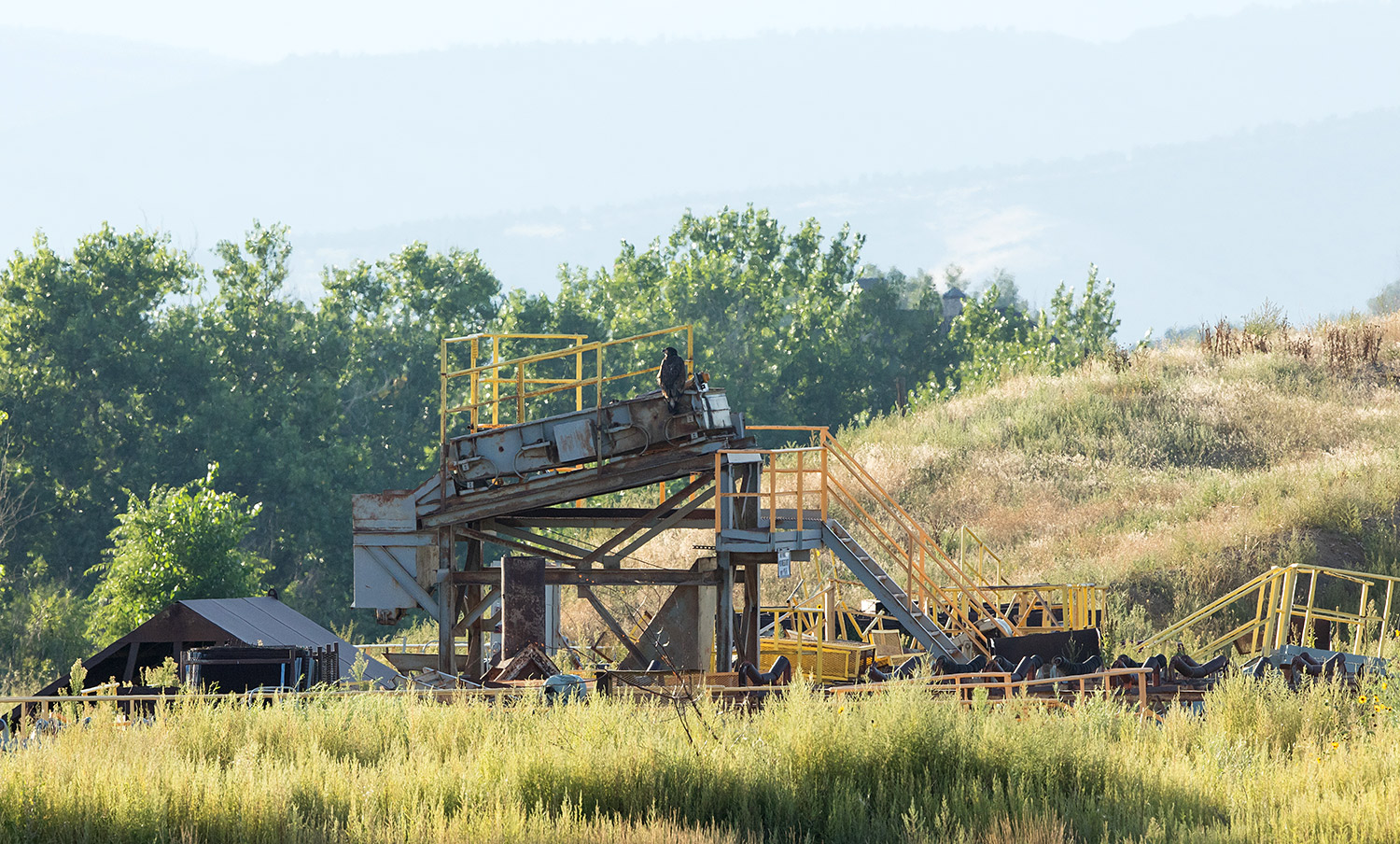 The Boulder Creek adult eagles are a highly experienced pair that have been together at least since our studies began in 2016. Both adults have easily identifiable characteristics. The female has a slightly deformed yet functional left foot that hangs lower than the other while flying, and the male has an identification band on his right leg. To date we have only been able to discern two numbers from the band, but we continue to look for an opportunity to fill in more characters so we can learn about his history. 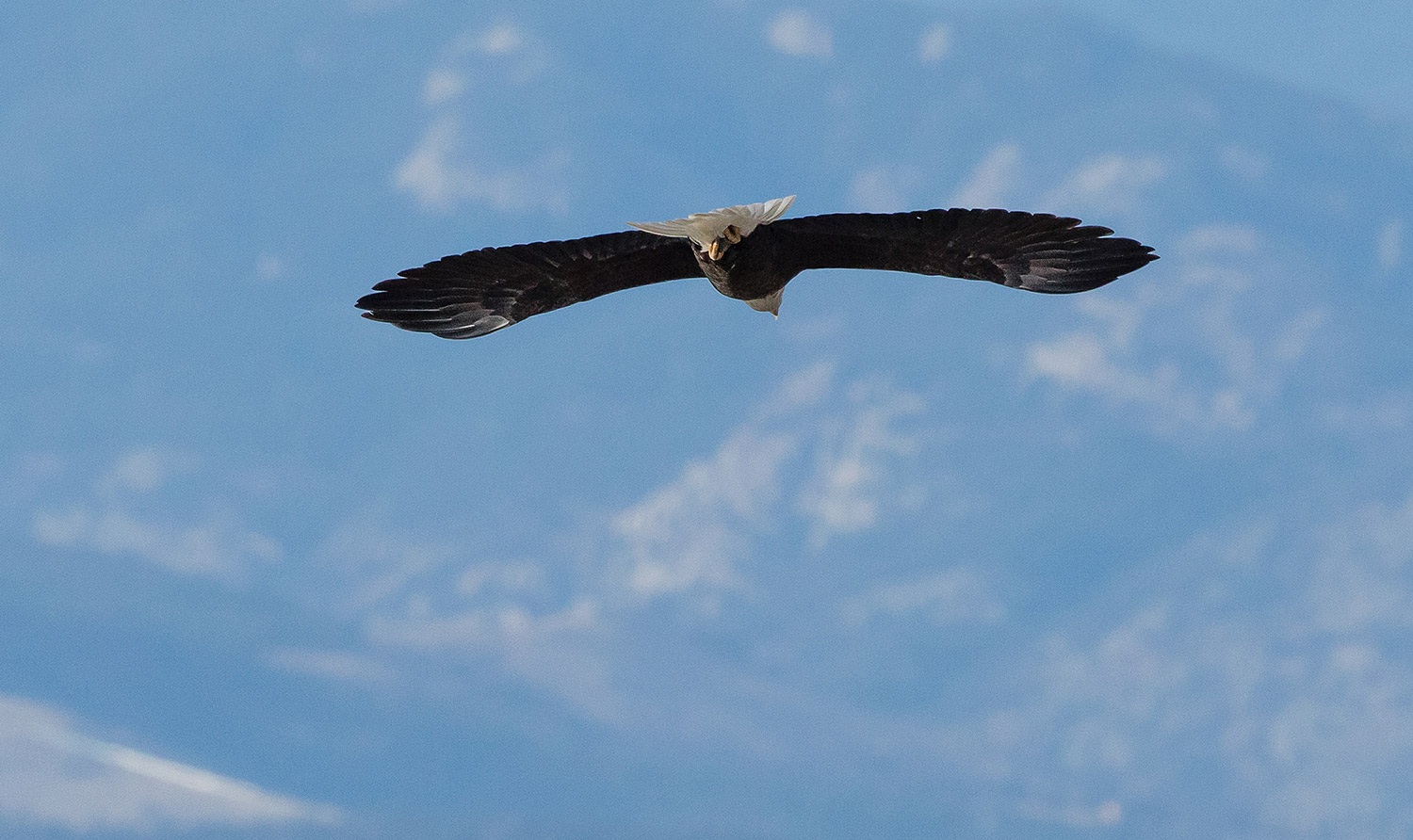 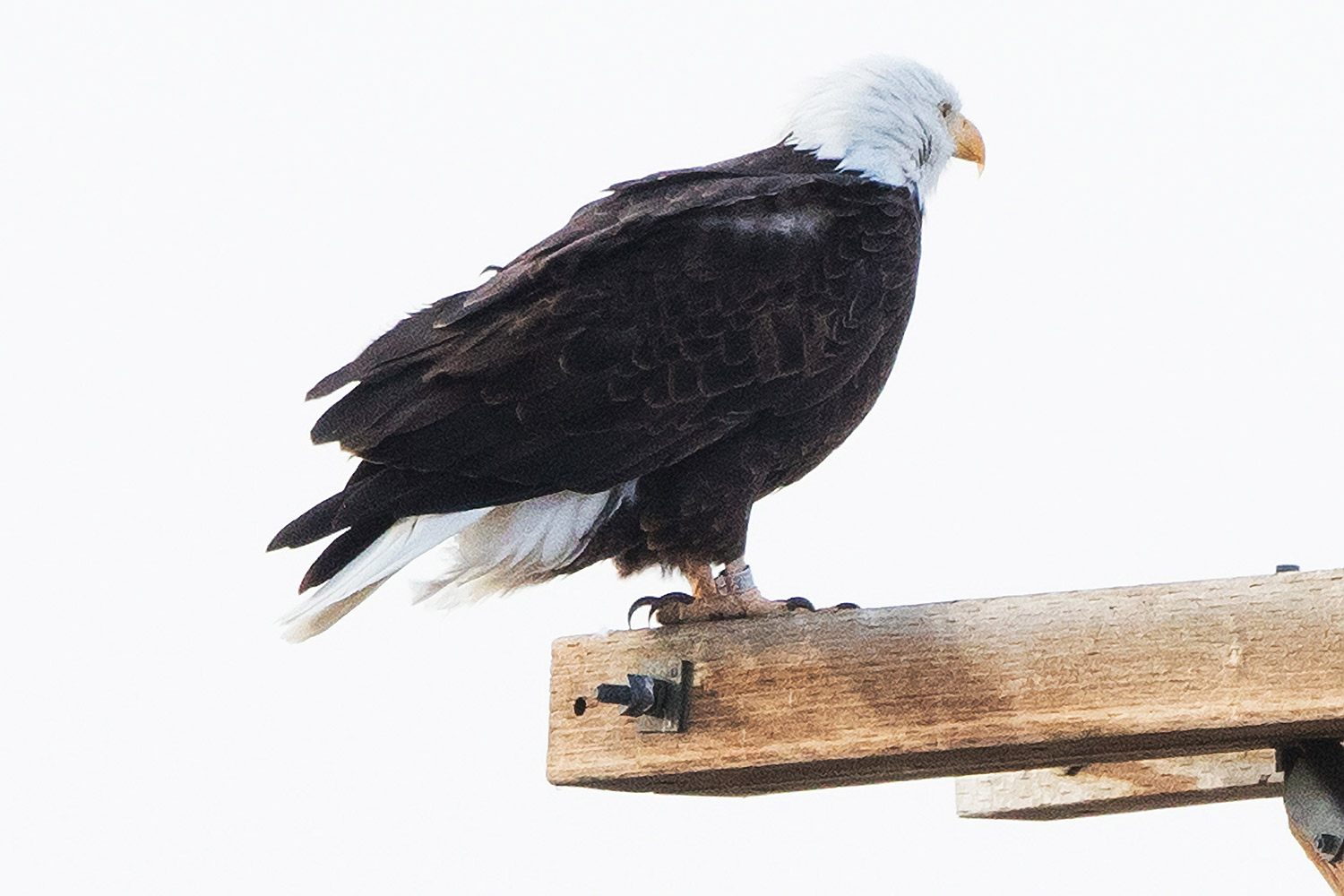 Like all nesting Bald Eagles in our study area, the Boulder Creek pair can be found year-round in and adjacent to their near-nest territory. Since their nest is located adjacent to an array of ponds along Boulder Creek, fish comprise a larger percentage of their diet than other nests further from fish sources, though they still feed extensively upon prairie dogs and rabbits from nearby upland. The ample source of fish draws in other fish-eating birds, including osprey that nest nearby. Skirmishes between the eagles and osprey are common. 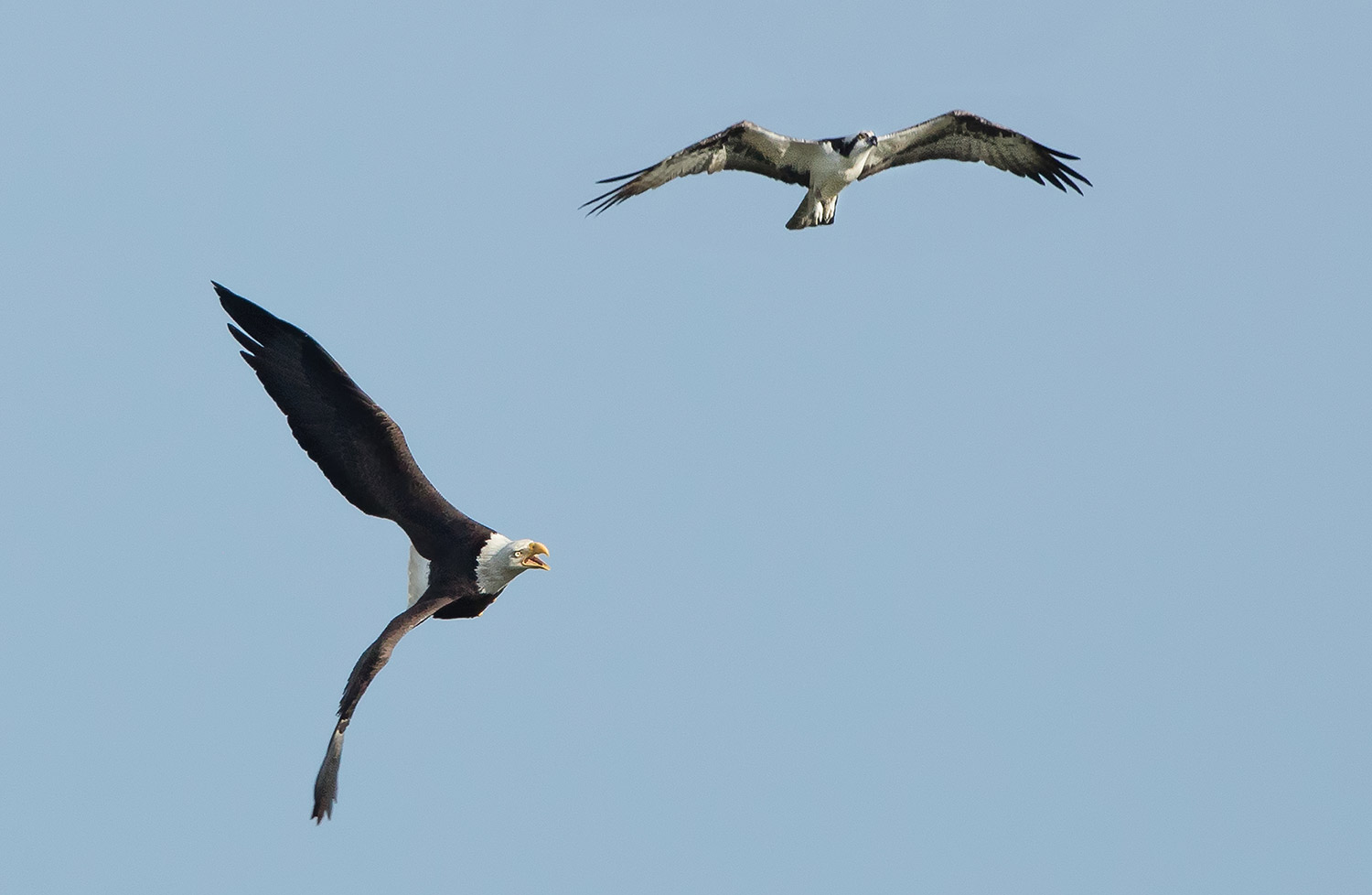 One of the other notable characteristics of this pair is the frequency of their paired flights and soaring. While all nesting bald eagles enjoy paired soaring, these two by far win the award for tandem flying time. 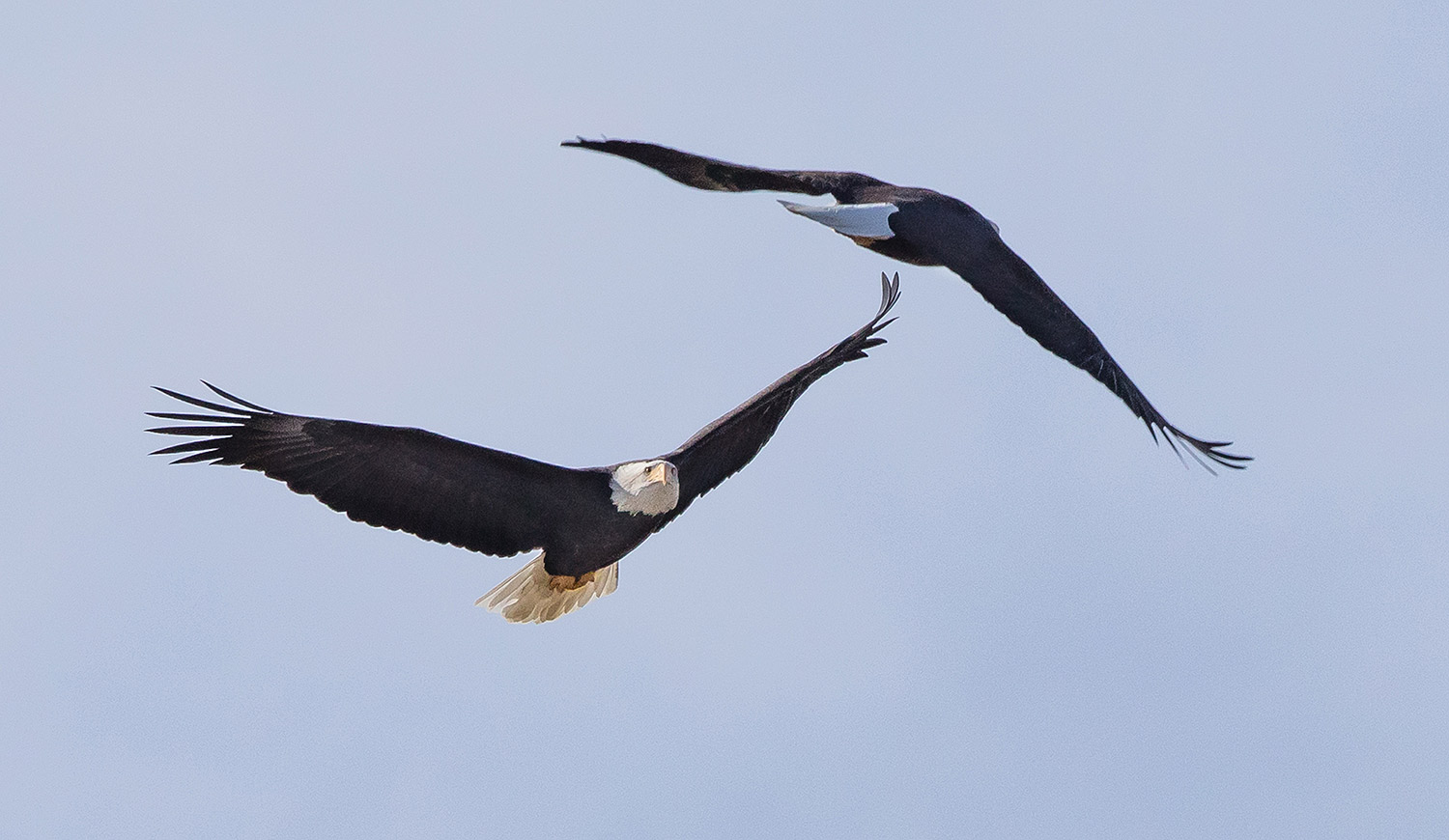 The Boulder Creek adults seasonally rotate their night perch locations.  From November until eggs are laid in earliest March, the pair roosts at night along a stream nearly 1.5 miles from their nest.  Once eggs are laid, the adults remain closer to the nest at night, and this continues up to a month after the juveniles disperse from their nest territory.

As in previous seasons, the Boulder Creek eagles during 2019 were among the last of our nesting pairs to lay eggs, beginning incubation on March 5th. (In comparison, the Erie and Stearns nests typically begin incubation nearly three weeks earlier). Two chicks hatched at the Boulder Creek nest on or about April 9th, and we observed their normal development in the ensuing weeks. However, as both eaglets approached the developmental stage that would support flight, one of them—JV1, the dominant of the two—suddenly disappeared.

After JV1’s sudden disappearance on June 21st, we remained hopeful that we might observe the parents bringing food to their grounded juvenile. Based on previous experiences, there was a good possibility that JV1 was safe but out of sight, as juvenile eagles often survive failed fledge attempts or falls from the nest. Unfortunately, we observed no such caretaking behavior by the adults in the ensuing days. Personally, the daily sessions in the following weeks were tainted with sadness, as we now watched JV2 develop without its sibling.

Field notes on July 15th, nearly three weeks after JV1 disappeared, document the sudden return of Lazarus: “2 true juvenile eagles perched next to each other about 3 meters apart on separate forked branches on perch R, near top north side. They both face east and seem very comfortable with each other.” Feeding of both juveniles by the adults during the next day’s observation session confirmed what was so difficult to believe—that for the last three weeks JV1 was alive and, unbeknownst to us, was being supported by its parents. It took some time for JV1’s flight-related developmental skills to catch up to JV2, but both were soon soaring as they prepared for their solo first-year ventures. 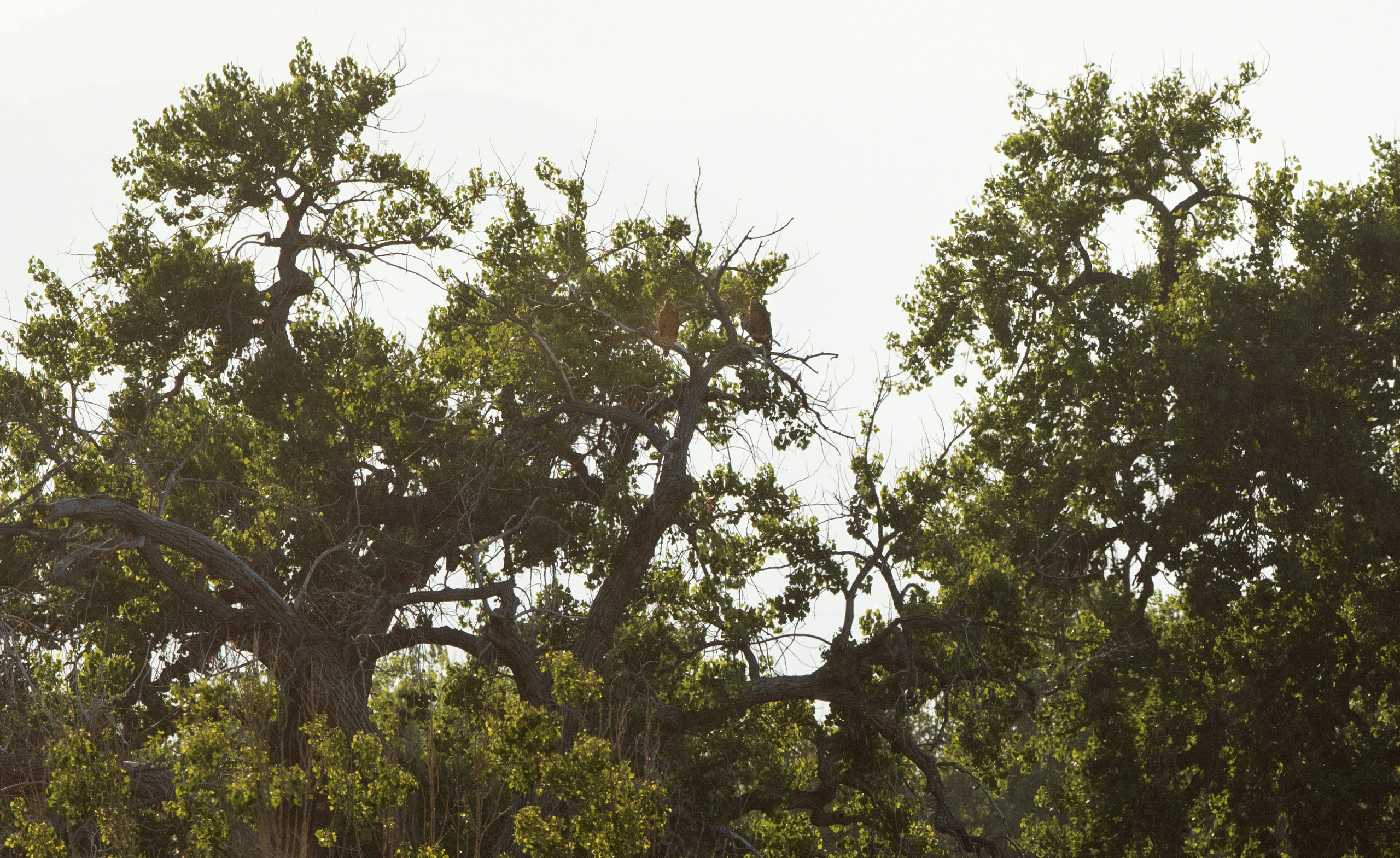 First sighting of JV1 in nearly 3 weeks, and sibling JV2

Human Encroachment and Nearby Development

During that year’s nine-week post-fledge dependence period, a transitional time during which the juveniles can fly yet remain tied to the territory and their parents, the Boulder Creek eagle family was faced with an onslaught of construction activity in their near-nest area. A major oil and gas pipeline project—the second in eight months—began in earnest on August 2 and continued for nearly two months, finally ending on October 11th.  The flurry of pipeline construction was joined by large-scale earth grading in an area coincident with much of the juveniles’ activity, including parental feeding.

The adult eagles remained in the territory after these projects ceased, but the impact on the two soon-to-be-independent juvenile eagles, which were in a critical period of growth and learning in advance of a difficult year ahead, is difficult to assess. Both juveniles remained in the nest area until mid-September, at which point they dispersed on their own journeys. 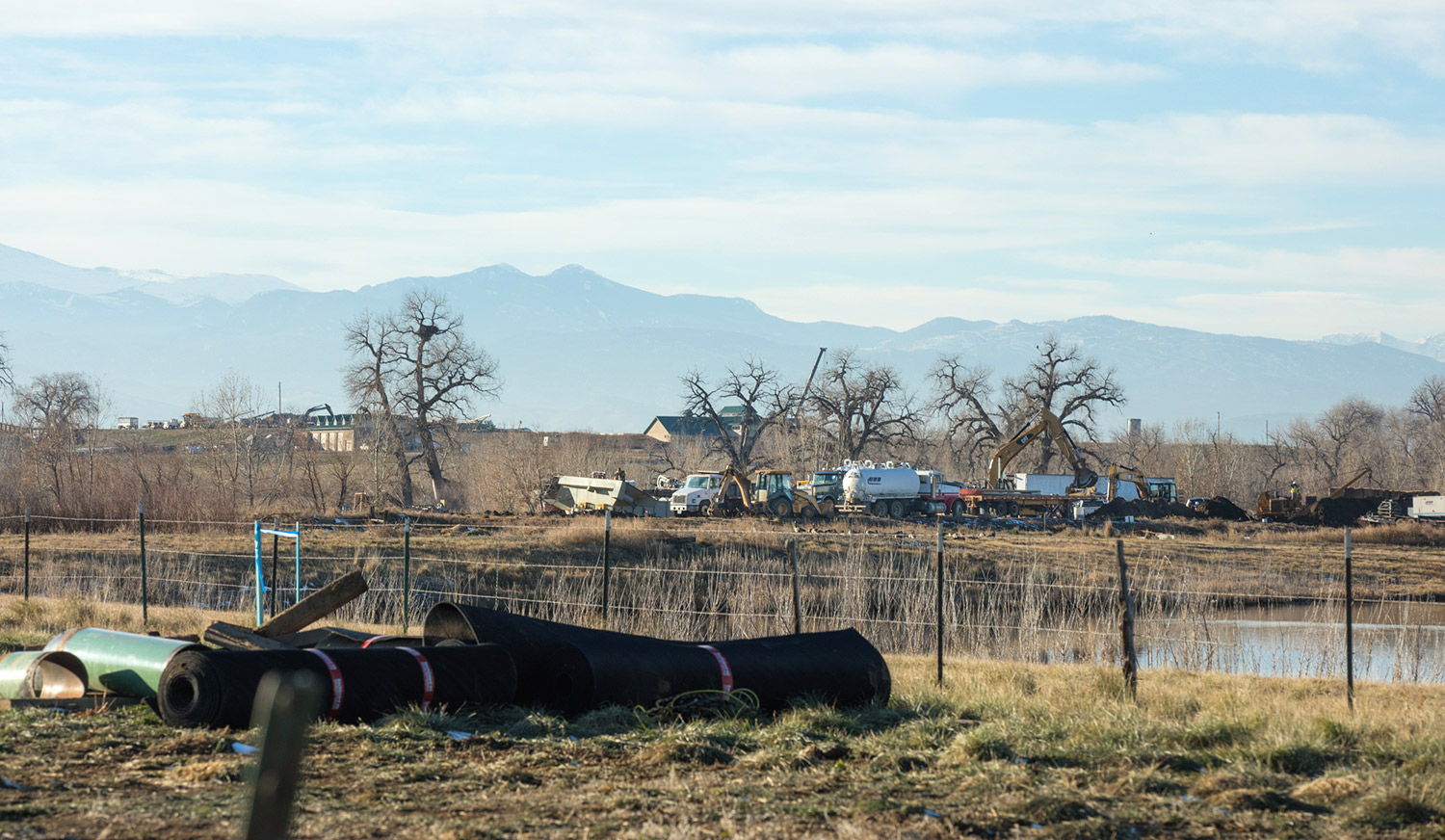 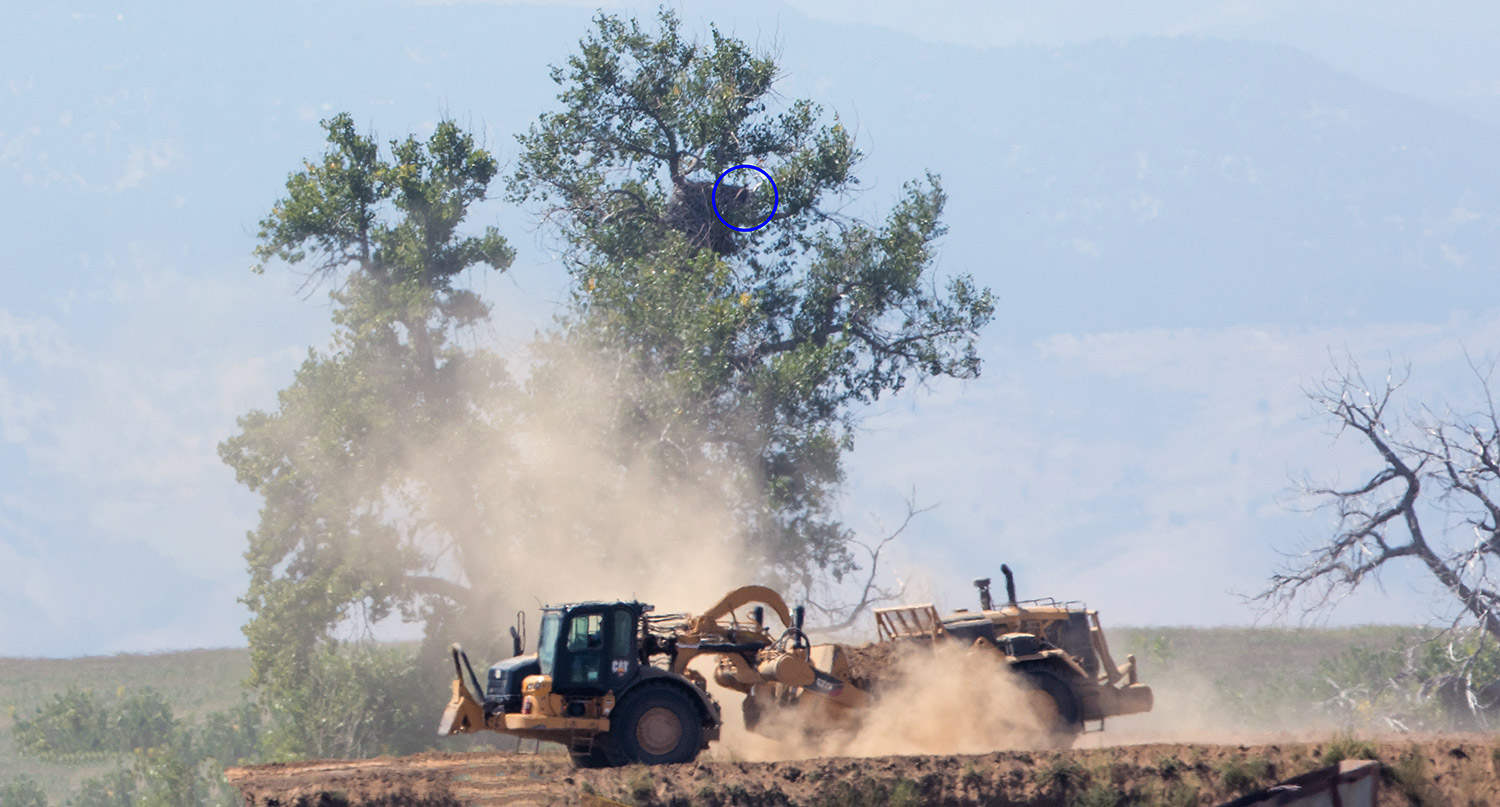 Grading equipment operating in late August, 2019 near nest, and in area of high use by juvenile eagles

Things have remained relatively quiet at the Boulder Creek nest area during the 2020 season, with two eaglets now being tended by both adults. It is a marvel that the adult eagles kept both young chicks alive during a severe mid-April snowstorm that left many Bald Eagle nests in the Colorado Front Range empty. We look forward to following the development of this family of eagles in the months to come. 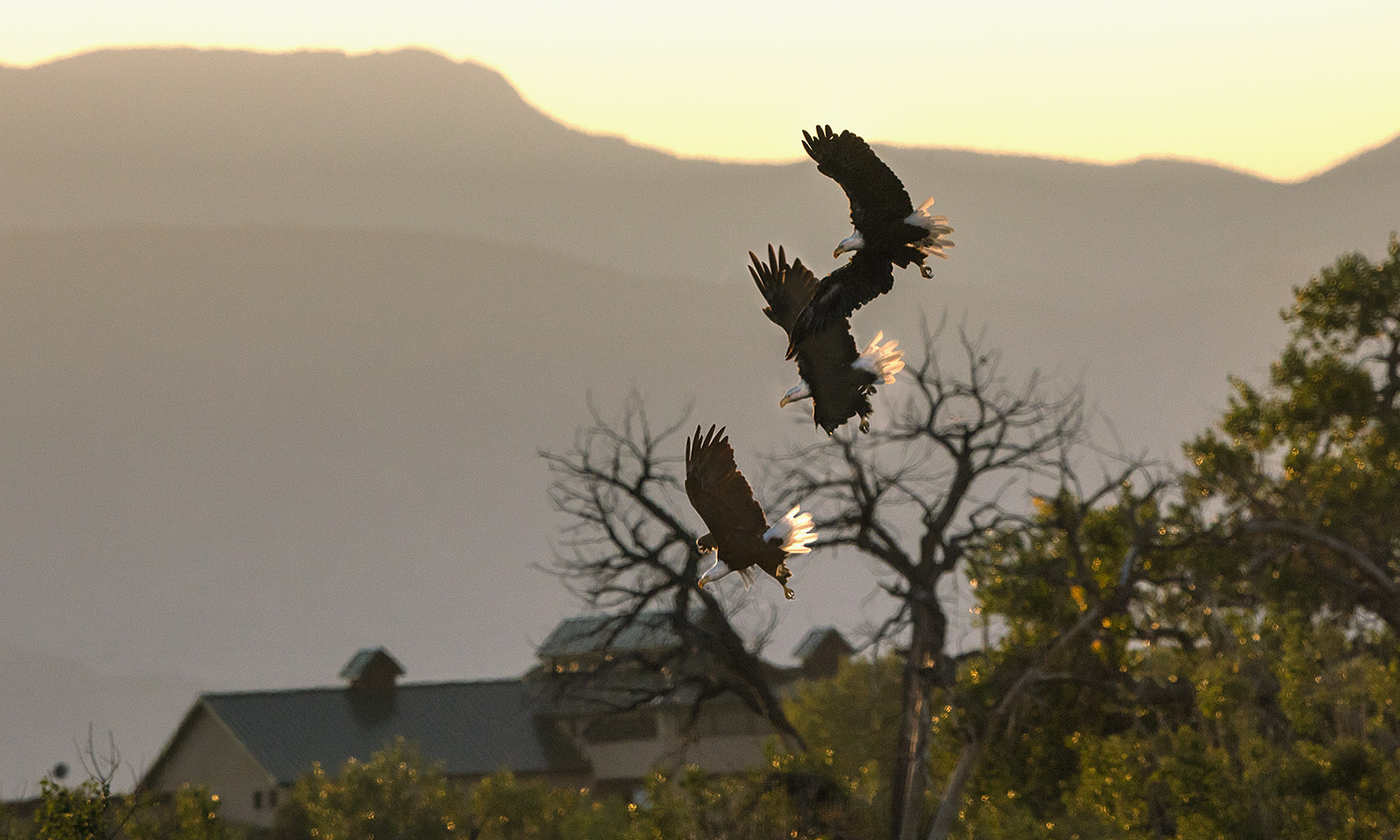 An Opportunity for Land and Habitat Conservation

Boulder Creek provides essential habitat for six Bald Eagle nest territories and four winter Bald Eagle communal roosts along its 13-mile course through the plains. Land conservation in Boulder County offers habitat protection for nearly half of this corridor. Unfortunately, the remainder of the land along Boulder Creek lies in western Weld County (including the Boulder Creek nest and three communal roosts), and is left without any real protections from resource extraction and development. In addition to eagle habitat, these same unprotected sections of Boulder Creek host several heron rookeries, and the ponds and wetlands provide habitat for a fascinating array of migrating and nesting birds. The wealth of wildlife in this area is apparent to anyone who visits. 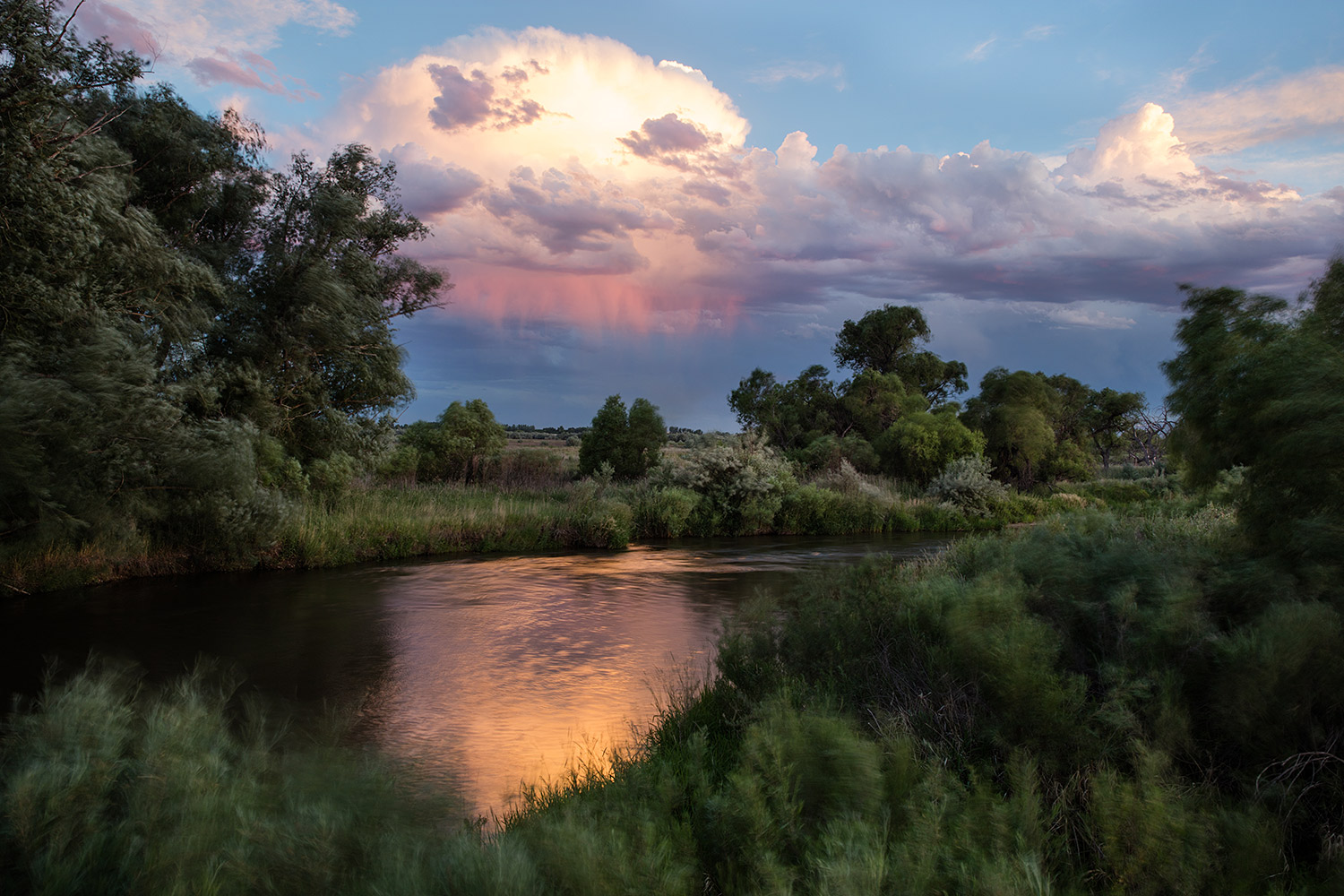 A land conservation opportunity has presented itself that includes nearly 200 acres of property surrounding the Boulder Creek nest. The gravel quarry operations on 123 acres of this land are nearing cessation. FRNBES has brought this to the attention of Colorado Parks and Wildlife (Colorado’s state wildlife agency), which has expressed an interest in finding a way to conserve these properties, and their staff has initiated conversations with the landowners.

As many of the best ideas do, these conservation plans need nurturing, which includes active advocacy, planning, and financial support. It is inconceivable that one of the richest wildlife and stream corridors in the northern Front Range could be lost to development, and yet houses are already replacing valuable habitat at a remarkable pace. FRNBES remains committed to turning our dream of a protected Boulder Creek along this critical stream reach into a reality.